THE RETURN OF NEIL GAIMAN'S SANDMAN 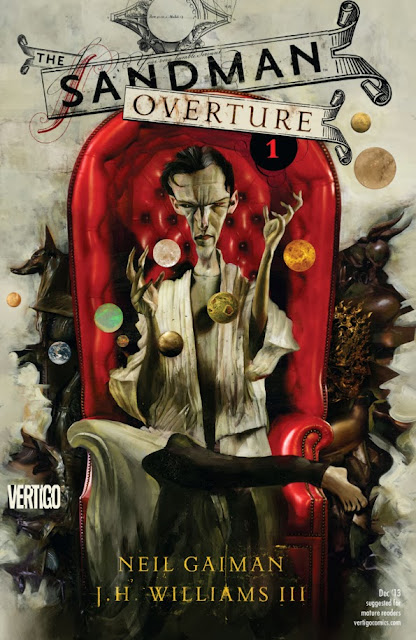 For many readers, Neil Gaiman’s Sandman was their introduction not only to the ethereal world of Morpheus, the Lord of Dreams, but the medium of comics itself. Long celebrated as a “gateway” drug for new readers—including many female readers—Sandman remains one of the few comics ever to make its way onto the New York Times bestseller list. This October, the series is returning to comic book shops with a brand-new story–or rather, an old one, called Sandman: Overture.

“There is one Sandman story that I never got to tell… what happened just before [the first bound collection] Preludes and Nocturnes began,” said Gaiman at Comic-Con International last weekend. In the very first issue of the series, we learned that Morpheus—aka
Sandman, the Lord of Dreams—had arrived in England dressed for war before he was captured for 38 years by a black magic organization. “He had come from somewhere very far away, and that was why they captured him so easily. But I never told that story.”

Now, over a quarter century later, Gaiman is returning to the world of the Endless–the humanoid embodiments of forces like Destiny, Death, and Desire–to tell that tale in a prequel comic that the author describes as “a kind of psychotic space opera. It hasn’t even started getting weird, and it’s already weird. But I don’t want to tell anybody anything about it. There are answers to questions nobody’s ever asked about the Endless. And I’m not even going to tell you the answers, because that gives away the questions.”

What surprises Gaiman most at the 25th anniversary of his most famous title is that audiences continue to buy, read and love the series “at a time when I would have thought that everyone would have completely forgotten about me and Sandman. But the world is even more excited and interested. The internet seems to have made it somehow more relevant and more exciting, so Sandman is still here and still alive.”

Part of that enduring popularity is due to Sandman’s publication in the graphic novel format, which collected the single issues–typically available only in comic book shops–into collected editions that could be purchased in bookstores. This helped put the series into the hands of a much broader audience, and gave them a much more durable physical object more likely to be placed on bookshelves than in trash cans.

“Now we live in a world of graphic novels, where storylines get collected, and in a world of digital. But comics were an utterly disposable medium when I started,” Gaiman told Wired. “If you wanted to read a comic that had come out, you rummaged in the back issue bins and you had to hope it wasn’t something anyone actually liked, or then it’d be up on the wall [as a collector’s item].”

Because the scarcity–and value–of the original Sandman issues grew with the popularity of the series, however, Gaiman says some comic book store owners actually took offense when the book’s publisher, DC Comics imprint Vertigo, first started releasing them in bound collections.

“They were really upset because they had Sandman #1 up on the wall at that point for $75 each and they figured they could get up to $200,” said Gaiman. “But then we made it available [as a graphic novel]. Why were we doing that? Didn’t we realize we were destroying the entire economy of comics? But I said, I think this thing may be good for us in the long term.”

Gaiman was right, to put it mildly. After sitting down with former DC Comics President Paul Levitz and crunching the numbers on royalties, Gaiman said they calculated that the single issues of the comic “would have to have sold 3 million copies a month to have caught up with where we were with the graphic novels.” (For some context, best-selling comics today tend to average between 100,000 and 200,000.) And that was ten years ago.

Although Gaiman says that he believes the new wave of digital comics have the potential to be positive for the comics medium, he finds the smaller screen displays of some digital comics “deeply frustrating to read, because there are effects you simply cannot have. There is nothing digitally yet that can compares to the effect of turning a page to a double page spread.”

Instead, he’s interested in experimenting with reader experiences that can only occur in print. “I love the idea of, what can you do in paper that you can only do in paper?” said Gaiman. “There was a scene [in Overture] and I had this idea that it should be two feet long. And [my editor] Shelly [Bond] said, is that what you want? And I said yes, but you can’t do it. And she said, I think we can.”

The first issue of Sandman: Overture will end with a four-page fold-out image. Regardless, if the artist joining Gaiman for the series is any indication, it’s going to look epic. “We had an incredibly short list of artists we were going to approach to draw it, and the list is standing right here. This is J.H. Williams III. His two clonal brothers J.H. William I and II were killed rescuing innocent people,” joked Gaiman as he stood next to his collaborator, who is known for his spectacular splash pages on books like Batwoman.

Gaiman says that all of the Endless – except, possibly, Destruction – will make appearances in the series, and that we’ll get a look at both Destiny and Death in the year 1916. He even offered a minor spoiler: The main character, Morpheus (aka Dream) “dies on page five.” Why is that a minor spoiler instead of a major one? Well, for the Endless, as their name implies, death is not the end. In Sandman: Overture, it’s only the beginning.