THE PSYCHOLOGY OF WORKOUT MUSIC 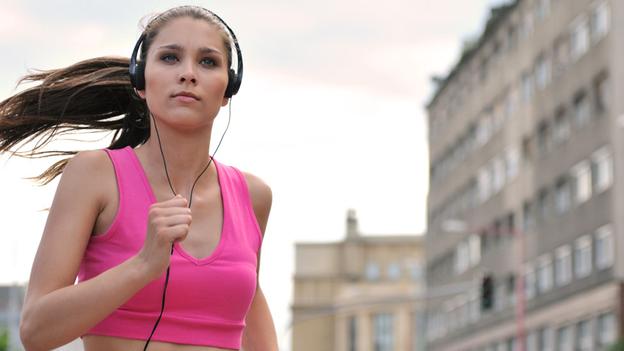 Why do we like to listen to tunes when we exercise? Psychologist Tom Stafford searches for answers within our brains, not the muscles we are exercising.

Perhaps you have a favourite playlist for going to the gym or the park. Even if you haven't, you're certain to have seen joggers running along with headphones in their ears. Lots of us love to exercise to music, feeling like it helps to reduce effort and increase endurance. As a psychologist, the interesting thing for me is not just whether music helps when exercising, but how it helps.

The signals to move the muscles start in an area of the brain called, unsurprisingly, the motor cortex. It's in the middle near the top. Part of this motor area is known as the supplementary motor cortex. Originally thought to be involved in more complex movements, this area has since been shown to be particularly active at the point we’re planning to make a movement, and especially crucial for the timing of these actions. So, this specific part of the brain does a very important job during exercise, it is responsible for deciding exactly when to act. Once you've realised that a vital part of most sporting performance is not just how fast or how strong you can move, but the effort of deciding when to move, then you can begin to appreciate why music might be so helpful.

The benefits of music are largest for self-paced exercise – in other words those sports where some of the work involved is in deciding when to act, as well as how to act. This means all paced exercises, like rowing or running, rather than un-paced exercises like judo or football. My speculation is that music helps us perform by taking over a vital piece of the task of moving, the rhythm travels in through our ears and down our auditory pathways to the supplementary motor area. There it joins forces with brain activity that is signalling when to move, helping us to keep pace by providing an external timing signal. Or to use a sporting metaphor, it not only helps us out of the starting blocks but it helps to keep us going until we reach the line.

Of course there are lots of other reasons we might exercise to music. For example, a friend of mine who jogs told me: "I started running to music so I didn't have to listen to my own laboured breathing." He might well have started for that reason, but now I'll bet the rhythm of the music he listens to helps him keep pace through his run. As one song might have put it, music lets us get physical.