STARBUCKS TO OPEN 1,500 MORE CAFES IN US 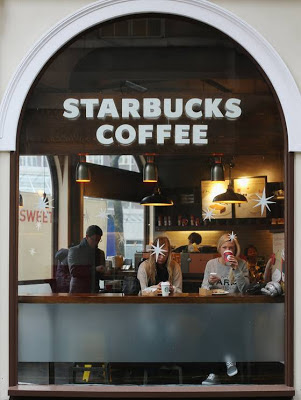 Another Starbucks may soon pop up around the corner, as the world's biggest coffee company plans to add at least 1,500 cafes in the U.S. over the next five years.

The plan, which would boost the number of Starbucks cafes in the country by about 13%, was announced at the company's investor day in New York Wednesday. Taking into account Canada and South America, the company plans to add 3,000 cafes in its Americas region.

Worldwide, the company says it will have more than 20,000 cafes by 2014, up from its current count of about 18,000. Much of that growth will come from China, which the company says will surpass Canada as its second-biggest market.

Although Starbucks has been intensifying its growth overseas and building its packaged-goods business back at home, the majority of its revenue still comes from its more than 11,100 cafes in the United States.

In an interview ahead of its investor day, CEO Howard Schultz said U.S. expansion plans are based "on the current strength of our business"

Just a few months ago, the company had predicted it would open just 1,000 cafes in the country over the next five years.

The upbeat expansion plans mark a turnaround from Starbucks' struggles during the recession. After hitting a rough patch, the company brought back Schultz as CEO in 2008 and embarked on massive restructuring that included closing 10% of its U.S. stores.

Cliff Burrows, who heads Starbucks' domestic business, said the problem wasn't that Starbucks was oversaturated, but that the company hadn't been careful about its store openings. In the years leading up to the downturn, the company was opening well over 1,000 stores a year. That led to cafes in locations where signs or traffic might not be optimal, he said.

Burrows said Starbucks has gotten more sophisticated, and noted that the cafes opened in recent years are among the company's best performers.

Since Starbucks already has a broad footprint, the company's expansion is intended to "deepen" its presence with additional stores in markets across the country, said Troy Alstead, Starbucks' chief financial officer. That means establishing stores — including drive-thrus and smaller cafes — in more convenient locations for customers. And even as it expands, Starbucks said it expects to maintain growth at cafes open at least a year. The figure, a key metric of health, has ranged between 7% and 8% globally the past three years.

The continued U.S. sales growth will be fueled by the new products, such as Evolution premium juices and Via single-serve coffee packets. Looking forward, Starbucks is also looking to improve its food menu and is testing a new menu of baked goods from La Boulange, a small San Francisco-based chain it acquired earlier this year. The new croissants, loaf cakes and other items will spread to about 2,500 cafes next year and go national sometime in 2014, Burrows said. The company says only about a third of customers currently buy food with their drinks.

In a test aimed at building sales in the evening hours, the company also started serving beer and wine at about a dozen locations earlier this year, with food such as chicken skewers and dates wrapped in bacon.

And most recently, Starbucks announced plans to acquire Teavana, a chain that has 300 locations in shopping malls. When the announcement was made last month, Schultz said the company would "do for tea what it did for coffee."

That includes plans to expand Teavana's presence beyond the shopping mall with stand-alone shops that have "tea bars" that serve specialty drinks. The company declined to say when Starbucks cafes would begin serving Teavana drinks — and it hasn't decided on whether it will continue to sell Tazo in cafes.

After a string of acquisitions in recent years to build on its core business, Schultz indicated Wednesday that the company would hold off on any additional purchases in the near future, noting that the company has "enough to handle."

To build its packaged-goods business, Starbucks plans to let customers earn points on their My Starbucks loyalty card starting next year when they purchase Starbucks bagged coffees in supermarkets and other outlets. Customers currently earn points only when they make purchases in Starbucks stores.
The picture isn't rosy around the globe, however. Europe remains a sore spot for Starbucks, with a key sales figure falling in the region 1% during the latest quarter. In an effort to boost results, the company has been closing underperforming stores and licensing of some of its cafes in the region.

In the United Kingdom, Starbucks is also embroiled in a row over its taxes. The company has been doing business in Britain for 15 years and has 700 outlets but it has yet to record a profit — and therefore pay any taxes.

Starbucks says this is due to a complex process where its taxable profits in the U.K. are calculated after royalties paid to its European headquarters in the Netherlands have been deducted.

Following criticism in the U.K. parliament and a campaign by protest group U.K. Uncut, Starbucks said this week that it was reviewing its tax approach.

Posted by pratanacoffeetalk at 8:02 AM