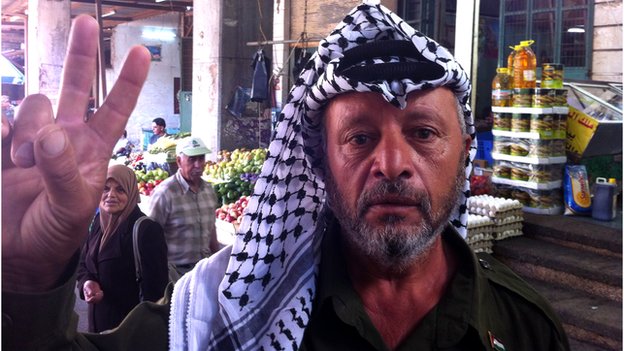 Eight years after the Palestinian leader Yasser Arafat died, he still remains a towering figure in Palestinian society. And he hasn't completely disappeared.

Picture the scene: You have popped down your local fruit and veg market to pick up a packet of potatoes, possibly a pepper, a couple of onions.

You are beginning to daydream about the corned beef hash you are planning to rustle up later.

When who should emerge from behind a pile of peaches, but Yasser Arafat.

Decked out in green military fatigues and his trademark chequered black and white headscarf, Chairman Arafat saunters through the crowds pausing occasionally to admire the cherry tomatoes or a nice looking melon.

"Two for a fiver, Abu Ammar," shouts a trader, in what I assume must be something akin to cockney Arabic.

He uses the name by which the Palestinian icon is affectionately known here. Abu Ammar responds with a victory salute and a toothy smile, before moving on past the cabbages and courgettes to shake the outstretched hands of shoppers. And just to be clear, this was just the other day, in Ramallah.

Now before the conspiracy theorists work up too much of a lather, there will be plenty of time for that later, this was obviously not the real Yasser Arafat back from the dead.

The man in the market was Salem Smeirat, something of a minor celebrity, as the West Bank's most impressive Yasser Arafat lookalike.

And this doppelganger is the "unreal deal". He has the same slightly hooked nose, the pouting lips, the twinkle in the eye.

Salem can often be seen at Palestinian festivals working the crowds, but on this occasion I had arranged to meet him down the market.

I was keen to hear what Salem made of current plans to bring the actual Arafat back from the grave.

The Palestinian Authority says it intends to exhume the body from its tomb in Ramallah to investigate whether he was murdered, after a television documentary reignited allegations that Arafat was poisoned, specifically by using the radioactive element polonium.

Perhaps strangely, the new accusations did not cause much of a stir among Palestinians.

Most have long taken it as unproven fact that their leader died of unnatural causes, poisoned by Israel with help from somebody inside Arafat's circle.

"It is no secret that Israel tried to kill me on many occasions," says Salem looking pained as he lapses back into character.

The Israeli government has always denied the poisoning allegations. And it is hard to imagine that whatever the outcome of the latest investigations, it will end the argument.

As is often the case, I suspect Palestinians and Israelis will each stick to their lines.

But I was also intrigued to know what Palestinians think of Arafat now, eight years after his death.

"Everybody loves Yasser Arafat," he declared, pointing to his chest. And it is true that you find few Palestinians, at least publicly, who speak ill of their former leader.

For most Israelis, Arafat was a terrorist who became an untrustworthy partner in peace. But for most Palestinians - at least in the West Bank - he remains a hero, a freedom fighter against Israel's occupation and a unifying figure.

"He was a father to us. The father of Palestine," Mansour Tahboub tells me as he guides me round the Yasser Arafat archive collection in Ramallah.

But as we look over old photos showing Abu Ammar as a fresh-faced pencil-moustached youth, I ask Mansour about all the allegations of corruption.

"Look," he tells me, "you love and respect your father but he is not perfect. He makes mistakes but you still love him."

Privately, many Palestinians are much more damning about the kickbacks and cronyism under Arafat's leadership. And publicly there are a few people who challenge his legacy.

"He was like a King, a Sheikh, with all the power in one man's hands," says Hazem, a young political activist.

When I ask him how Arafat might have fared in the so-called Arab Spring, Hazem stops short of calling his former leader a dictator.

He tells me people loved Arafat but that he was a terrible manager and that Palestinians are still recovering from the system he created.

Perhaps Arafat's most enduring legacy, though, is that in terms of popular support, Palestinians have never been able to fill his shoes.

Across the West Bank you see graffiti and murals celebrating Abu Ammar, but you do not see much depicting Abu Mazen, the current Palestinian President Mahmoud Abbas.

Palestinians have an Arafat lookalike - but for many the real thing has remained irreplaceable.

Posted by pratanacoffeetalk at 10:02 AM