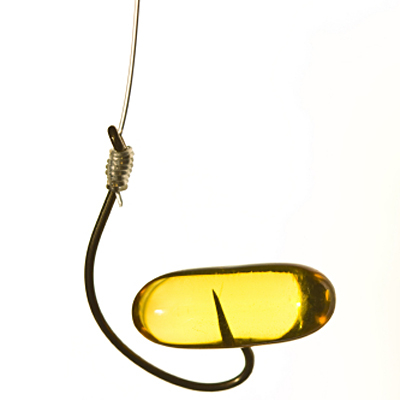 Most of Americans diets are heavily Omega-6 fatty acids. The ideal balance between Omega-6 and Omega-3 should be a 2 to 1 ratio. Yet, in the American diet, the ratio balance is as
much as 50 to 1. This leads to an imbalance of the types of fatty acids that affect all the areas of the body. One of them is the health of the cardiovascular system.

Studies show that increasing the amount of Omega-3 fatty acids tends to decrease the triglyceride levels, lowers the blood pressure, decreases the amount of plaque build up on the vessel walls and decreases the risk of coronary arrhythmia that may lead to death. The Omega-3 also showed that it helped those prone to strokes if they had known heart disease.

Even though there are other types of foods that contain Omega-3 fatty acids, fish oil contains a special type. The Omega-3 from plant oils like the soybean, flaxseed or olive oil contain alpha-linolenic acid known as ALA. Fish oil contains dicosahexaenoic acid, DHA, and eicosapentaenoic acid, EPA that has additional benefits.

Most of the scientific studies that showed the dramatic and pronounced effects came from the Omega-3 with DHA and EPA. While those that contained the ALA also had some effect, it wasn't as pronounced and the evidence was less convincing.

Logically and according to the way the body works, a human should be able to make their own EPA and DHA Omega-3 from the ALA found in dark green vegetables. Unfortunately, it only works on paper and is not nearly as efficient in real life. Because of this fact, those involved in medical research often propose that additional supplements of Omega-3 EPA and DHA provide the necessary fatty acids that your body doesn't make in enough volume.

In the second half of the 1970s, scientists studied the Eskimo Indians, the Inuit, in Greenland. They found that there were many diseases that were significantly lower than those of the general European population were. These diseases were diabetes, rheumatoid arthritis, coronary heart disease and psoriasis.

The Inuit had a high diet of fat from their consumption of seal, whale and salmon, so it was directly opposed to the normal thinking about fat. It was only after analyzing the type of fat contained in the diet, those high in Omega-3 essential fatty acids, did the scientists realize that these types of fat actually benefit the individual, unlike their counterparts that cause distress to the body.

More research into the use of Omega-3 fatty acids is taking place to find whether large doses of this new vitamin F actually could bring a benefit to those with Parkinson's disease, Alzheimer's disease, ADHD, alcoholism, bipolar disease, diabetes, depression or arthritis. There is hope on the horizon that not only would large doses be effective treatments but also effective as preventatives as well.

Although those treatments are simply investigations right now, we do know that Omega-3 fatty acids bring definite improvement to those with high cholesterol and heart conditions. Fish oil is just one simple way add that benefit to your diet.

Posted by pratanacoffeetalk at 7:57 AM