Although the term D-Day is used routinely as military lingo for the day an operation or event will take place, for many it is also synonymous with June 6, 1944, the day the Allied powers crossed the English Channel and landed on the beaches of Normandy, France, beginning the liberation of Western Europe from Nazi control during World War II. Within three months, the northern part of France would be freed and the invasion force would be preparing to enter Germany, where they would meet up with Soviet forces moving in from the east.


With Hitler's armies in control of most of mainland Europe, the Allies knew that a successful invasion of the continent was central to winning the war. Hitler knew this too, and was expecting an assault on northwestern Europe in the spring of 1944. He hoped to repel the Allies from the coast with a strong counterattack that would delay future invasion attempts, giving him time to throw the majority of his forces into defeating the Soviet Union in the east. Once that was accomplished, he believed an all-out victory would soon be his. 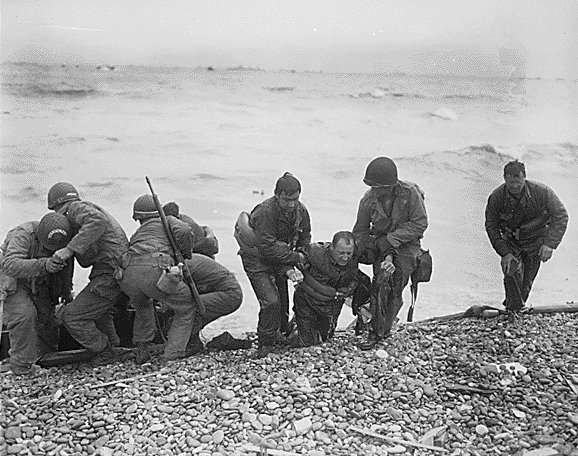 On the morning of June 5, 1944, U.S. General Dwight D. Eisenhower, the supreme commander of Allied forces in Europe gave the go-ahead for Operation Overlord, the largest amphibious military operation in history. On his orders, 6,000 landing craft, ships and other vessels carrying 176,000 troops began to leave England for the trip to France. That night, 822 aircraft filled with parachutists headed for drop zones in Normandy. An additional 13,000 aircraft were mobilized to provide air cover and support for the invasion.

By dawn on June 6, 18,000 parachutists were already on the ground; the land invasions began at 6:30 a.m. The British and Canadians overcame light opposition to capture Gold, Juno and Sword beaches; so did the Americans at Utah. The task was much tougher at Omaha beach, however, where 2,000 troops were lost and it was only through the tenacity and quick-wittedness of troops on the ground that the objective was achieved. By day's end, 155,000 Allied troops--Americans, British and Canadians--had successfully stormed Normandy’s beaches. For their part, the Germans suffered from confusion in the ranks and the absence of celebrated commander Field Marshal Erwin Rommel, who was away on leave. At first, Hitler, believing that the invasion was a feint designed to distract the Germans from a coming attack north of the Seine River, refused to release nearby divisions to join the counterattack and reinforcements had to be called from further afield, causing delays. He also hesitated in calling for armored divisions to help in the defense. In addition, the Germans were hampered by effective Allied air support, which took out many key bridges and forced the Germans to take long detours, as well as efficient Allied naval support, which helped protect advancing Allied troops.

Though it did not go off exactly as planned, as later claimed by British Field Marshal Bernard Montgomery--for example, the Allies were able to land only fractions of the supplies and vehicles they had intended in France--D-Day was a decided success. By the end of June, the Allies had 850,000 men and 150,000 vehicles in Normandy and were poised to continue their march across Europe.

The heroism and bravery displayed by troops from the Allied countries on D-Day has served as inspiration for several films, most famously The Longest Day (1962) and Saving Private Ryan (1998). It was also depicted in the HBO mini-series Band of Brothers (2001).