THE SECRETS OF AN ANCIENT TEL AVIV FORTRESS 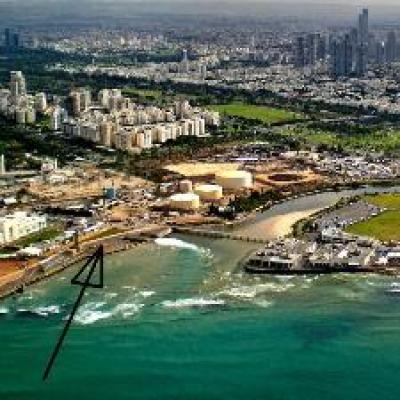 New archeological research from the Tel Qudadi archaeological dig near Tel Aviv suggests an ancient link between the Israeli city and the Greek island of Lesbos -- a find producing new insights into alliances and trade routes in the ancient world.

Tel Qudadi, an ancient fortress located in the heart of Tel Aviv at the mouth of the Yarkon River, was first excavated more than 70 years ago -- but the final results of neither the excavations nor the finds were ever published. Now, research on Tel Qudadi by archaeologists at Tel Aviv University has unpeeled a new layer of history, indicating that there is much more to learn from the site, including evidence that links ancient Israel to the Greek island of Lesbos.


"The secrets of this ancient fortress are only beginning to be revealed," Dr. Alexander Fantalkin and Dr. Oren Tal of Tel Aviv University's Department of Archaeology say. Their new research was recently published in the Palestine Exploration Quarterly and BABESH: Annual Papers on Mediterranean Archaeology.

It was previously believed that the fortress was established during the 10th century B.C.E. at the behest of King Solomon, in order to protect the approach from the sea and prevent possible hostile raids against inland settlements located along the Yarkon River. The establishment of the fortress at Tel Qudadi was taken then as evidence of the existence of a developed maritime policy in the days of the United Monarchy in ancient Israel.

In another reconstruction, it was suggested that the fortress was erected sometime in the 9th century B.C.E. and could be attributed to the Kingdom of Israel. Now a careful re-assessment of the finds conducted by Tel Aviv University researchers indicates that the fortress cannot be dated earlier than the late 8th -- early 7th centuries B.C.E., much later than previously suggested.

What this means is that the fortress, although maintained by a local population, was an integral part of a network that served the interests of the Assyrian empire in the region. The Assyrians, once rulers of a mighty empire centred in Mesopotamia (modern day Iraq), ruled Israel in the late 8th and most of the 7th centuries B.C.E.

From Lesbos to Tel Aviv

One of the key finds, say researchers, is an amphora (a large jar used to transport oil or wine) which hails from the Greek island of Lesbos. The existence of the artifact, together with a re-assessment of the local ceramic assemblage of Tel Qudadi, has helped researchers to re-calculate the timeline of the site's operation. Amazingly, it seems to be the earliest example of the Lesbian amphorae discovered so far in the Mediterranean, including the island of Lesbos itself.

While a single find cannot prove the existence of trade between ancient Israel and Lesbos, the finding has much to say about the beginnings of the island's amphora production and has implications for understanding trade routes between different parts of the Mediterranean.

What remains a mystery, say the researchers, is how the Lesbian amphora arrived at Tel Qudadi in the first place. It's probable that it was brought as part of an occasional trade route around the Mediterranean -- possibly by a Phoenician ship.

An important sea-route for commerce and trade

Now that the site can be dated from the late 8th -- early 7th centuries B.C.E., the fortress at Tel Qudadi may be considered an important intermediate station on the maritime route between Egypt and Phoenicia, serving the Assyrian interests in the Levantine coast rather than a part of the Israelite Kingdom.

The Assyrian interest in the coastal area is known to have stemmed from their desire to be involved in the international trade between Phoenicia, Philistia and Egypt. The fortress should be seen then as part of a network of fortresses and trading posts along the coast. It demonstrates that the Assyrian officials invested a great deal of effort in the routing of commerce and its concomitant taxes.