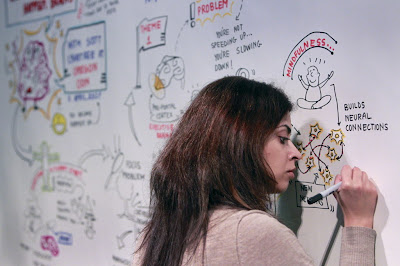 Nitya Wakhlu is not a particularly talented artist, but clients including Nike,Oregon Health & Science University and the state of Oregon are willing to pay her up to four figures for a day of drawing.

It's not the artistic expression they're after. They're more interested in Wakhlu's expertise at using cartoonish images to help their employees cooperate in group settings, and make takeaway messages stick with them long after a meeting is over.

Wakhlu is Portland's only full-time graphic recorder, a small but growing arm of the broader realm of facilitators -- professionals at helping groups collaborate. Unlike most facilitators who use words as encouragement, she captures the essence of meetings and presentations in visual form, a tactic proven to drastically improve information retention.

How it's done
At a recent gig, Wakhlu starts her workday by carefully selecting the best colored markers from a canvas bag. She will spend the next couple of hours turning keynote  speaker Scott Crabtree's words into images.

To start, she draws a cartoon brain with a California Raisin grin. Above it, in bright red, Wakhlu writes the speaker's topic: Enhance Your Organization with Happier Brains.

The audience of 30 or so business networkers listens as Crabtree details the perils of multitasking. Eyes wander to Wakhlu's hand as she visually maps Crabtree's advice. She's breaking every one of his rules. She's at once listening to his presentation, taking notes, thinking up alternative ways to present it, and drawing key concepts on a paper banner that stretches halfway across the wall.

"I've done it so much it doesn't feel like multitasking," Wakhlu says. "It just feels like a natural process."

By the end of the presentation, Wakhlu has filled the banner. It includes Crabtree's main points, as well as audience input and other information, synthesized into a visually appealing map.

In a day or two, she'll send a digital version to audience members who will post it on websites and office walls, creating a permanent group memory.

The science
"It's a way to hold on to the spirit of what happened ... like the feeling you have after going to an event and taking home a souvenir mug," says Laurel Singer, who has used graphic recording in her role as director of Portland State University's Oregon Consensus program. "It gets people out of the business-as-usual kind of thinking."

Wakhlu is a strong believer in the picture superiority effect, a principle that information is far more likely to be retained when it is absorbed visually. Studies show three days after hearing information, the audience is likely to remember 10 percent of what was said. If you add a picture, they'll remember 65 percent.

Wakhlu gave an impassioned talk at February's Ignite Portland  about the brain's response to graphics. Most of the sensory neurons in our brain are dedicated to visual learning, so seeing work engages people much more than hearing, she says.

It doesn't come cheaply. Retaining a graphic recorder for a day typically costs between $700 and $4,000, depending on the recorder's experience level and the company's ability to pay (many recorders have separate rates for nonprofits).

Supporters of the practice say it's worth the money. If the company is already paying employees to be in the discussion or training room, why not pay extra to maximize the value of their experience?

In addition to the scientific data, believers say graphic recorders provide a slew of intangible benefits that can't be achieved with a beefed up PowerPoint.

Shy participants become more vocal when they see visual proof that their comments are heard, they say. Recorders help quell divisiveness by giving equal drawing space to all viewpoints. And having a visual map of the discussion makes it easy to review the group's progress.

"Often, I'm with people with English as their second, third or fourth language," Lei says. "When I'm teaching or facilitating, I'm doing it in English. The visuals really help streamline communication."


An emerging practice
Graphic recording emerged in the 1970s and has flourished despite no university offering a degree in the practice. Most people came from careers in consulting, graphic design or other related fields.

But as word spreads, numbers are growing. The International Forum of Visual Practitioners' membership has spiked from just a handful when the forum was founded in 1995 to about 200 members today, says Jeannel King, the group's president. Colleges such as the Fielding Graduate School are beginning to offer courses in visual facilitation and publications including the  Harvard Business Review have taken notice.

"People are starting to talk about us," King says.

In Portland, the practice is still catching on. When Wakhlu moved here from India in 2008, she did lots of pro bono work to gain clients. Now, she secures repeat contracts with prominent companies.

"It became an integral part of how I teach," Lei says. "In any workshop I'm doing, there's a percent of people in the room who are more visual learners and need that. It's giving them what they need."

Kelly House
Follow @kelly_m_house
---------
http://www.oregonlive.com/living/index.ssf/2012/04/portland_graphic_recorder_maps.html
Posted by pratanacoffeetalk at 9:30 AM