ADVANCED DINOSAURS MAY RULE OTHER PLANETS 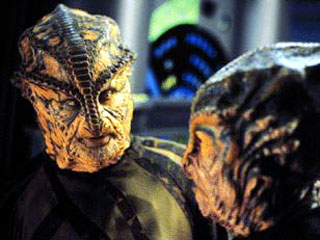 It sounds like the plot to a science fiction story, but new scientific research hypothesizes that "advanced dinosaurs" may have evolved on other planets in the universe.

According to Dr. Ronald Breslow, the advanced versions of T. rex and other dinosaurs would likely be monstrous creatures with the intelligence and cunning of humans.

"We would be better off not meeting them," Breslow concludes in a study that appears in the Journal of the American Chemical Society.

In his report, Breslow discusses the age-old mystery of why the building blocks of terrestrial amino acids (which make up proteins), sugars, and the genetic materials DNA and RNA exist mainly in one orientation or shape.

There are two possible orientations, left and right, which mirror each other in the same way as hands. This is known as "chirality." In order for life to arise, proteins, for example, must contain only one chiral form of amino acids, left or right.

Breslow describes evidence supporting the idea that the unusual amino acids carried to a lifeless Earth by meteorites about 4 billion years ago set the pattern for normal amino acids with the L-geometry, the kind in terrestrial proteins, and how those could lead to D-sugars of the kind in DNA.

"Of course showing that it could have happened this way is not the same as showing that it did," Breslow acknowledges.
"[Yet], an implication from this work is that elsewhere in the universe there could be life forms based on D-amino acids and L-sugars. Such life forms could well be advanced versions of dinosaurs, if mammals did not have the good fortune to have the dinosaurs wiped out by an asteroidal collision, as on Earth. We would be better off not meeting them."

As every self respecting Trekkie knows, the fictional crew of USS Voyager actually did meet a pair of saurian scientists while navigating the Delta Quadrant in the Distant Origin episode.

After analyzing human DNA samples, the saurian scientists - along with Voyager's EMH - concluded that their species (Voth) was an evolved dinosaur from a species that left Earth more than 65 million years earlier.

Unfortunately, the so-called "distant origin" theory is considered heresy as it threatens the traditions and ideology of the proud Voth, who believe they originated in the Delta Quadrant. The scientists are forced to retract their theory after the Voth threatens to imprison the Voyager crew in a detention colony. The Voth's true heritage remains a secret, but for how long?

------
http://www.tgdaily.com/general-sciences-features/62672-claim-advanced-dinosaurs-may-rule-other-planets
Posted by pratanacoffeetalk at 9:35 AM