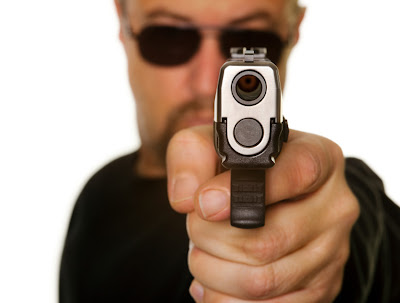 People are wired to size up how big and strong their opponents are, even when no physical fighting is involved.

Just seeing a hand that is holding a gun is enough to convince people that the weapon-holder is extra big and extra strong, found a new study, which suggests that humans evaluate opponents much like our early ancestors did.

By taking in a situation and quickly condensing all available information into a simple estimate of size and strength, this ancient system of danger assessment might be what guides people to decide whether or not to enter conflicts, even when those conflicts are no longer physical.

Understanding how and why people make conflict-related decisions, in turn, could help guide better decision-making, especially in high-stakes situations among military or police officers.

And it's probably not just weapon-holding that factors into how we assess other people.

"What we think we're tapping into here is a system that summarizes many, many variables in a single, easy-to-think form, namely a picture in your head, and ultimately we think that this then is the key variable that is used in calculations of what to do next," said Daniel Fessler, an evolutionary anthropologist at the University of California, Los Angeles.

"Potentially, these kinds of calculations go on all the time in situations of conflict of interest, even at the level of large groups or whole armies," he added. "Now we have whole nation states with incredible technology going to war, and still people making those decisions have representational systems in their heads that use very simple dimensions of size."

Plenty of research has established a strong link between social status and size -- both real and imagined. The more important people think someone is, for example, the larger they tend to estimate that person to be.

We even call powerful people "big-wigs" or a "big deal," regardless of their actual size.

And while physically larger people are more likely to win in hand-to-hand combat, our culture has moved beyond the simple fight-for-your-life strategy of survival. In modern society, conflicts are often more nuanced than a fist fight.

To see whether an ingrained sense of size and strength might still hold power over us despite our culture's movement away from phsyicality, Fessler and colleagues conducted a series of online experiments with hundreds of people around the United States.

For each trial, people looked at one picture at a time of a man's hand holding one of a variety of objects. The hands were all the same size and in the same position, but some objects were more threatening than others.

Then, participants picked from among silhouettes that suggested how tall or muscular they thought the rest of the man's body was. 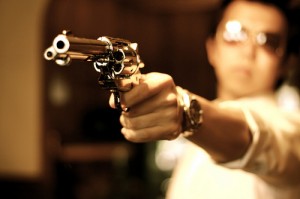 When participants saw a hand holding a .45 caliber handgun or a kitchen knife, the researchers report today in the journal PLoS ONE, they picked silhouettes that were taller and more muscular than if they saw a hand holding a drill, a small handsaw, a caulking gun, a paintbrush or a colorful toy water gun.

With various permutations of the study, the researchers were able to rule out the possibility that people were relying on stereotypes about the kinds of people who carry weapons to make their size judgments. Instead, there was something about holding a dangerous object that made potential adversaries loom larger in their minds.

The new findings suggest "that our internal representations of power are stored in the format of size and strength," said Aaron Sell, who studies how people assess formidability at Griffith University near Brisbane, Australia. "That's interesting for cognitive theories about how humans size each other up."

In previous work, Sell has found that people can judge the physical strength of others by looking at their bodies or faces or listening to their voices. The new study adds weapon-holding to the list of factors that arouse an ancient system of sussing out danger.

Despite great advances in society and culture, it seems, we're still deeply concerned about how big and strong our opponents are, no matter what we're fighting about.