THE HAWK OF KHAN 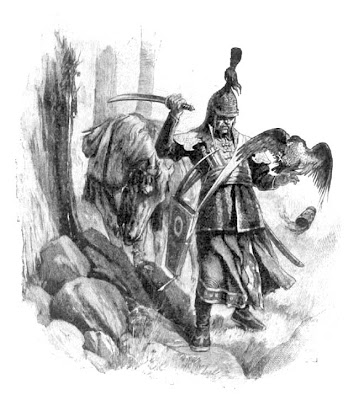 In dewy grass, there hops a timid hare,
Who finds a blossom with his wand’ring nose,
Delighting in a delicacy so rare.

Behind the hare a serpent’s shadow grows.
It rises up and lunges with a hiss,
To make its prey of that which ate the rose.

The bulging snake slides on in sated bliss
And finds a running brook by which to sleep,
To cool himself while dozing in the mist.

Yet, while he dreams the waters slowly creep,
Because of rain, to flood the banks at night.
The snake lies limp, for whom none care to weep.


And no one saw all this, but I in flight.
I soared on chestnut wings, but sought no prey,
When I perceived my master’s sorry plight.

He’d stooped, not far from where the serpent lay
To quench his thirst from newly poisoned stream.
My talons grasped his cup; I flew away.

But, like a fool, he raised his fist and screamed,
“You stupid hawk, I only want a sip!”
And yet, a “stupid hawk” I only seemed.

A second time I knocked it from his grip,
And still, he bent again to drink of death.
I took the cup before it reached his lips.

He glared at me, and drew an angry breath.
I watched him from above, in circling flight.
I saw, too late, the sword pulled from its sheath.

Beneath the midday sun, his sword gleamed bright,
A throbbing filled my chest, my world flashed white.
He is not promised life, who would do right.