THE EXECUTIVE PRODUCER OF "THE DARK KNIGHT RISES" (video) 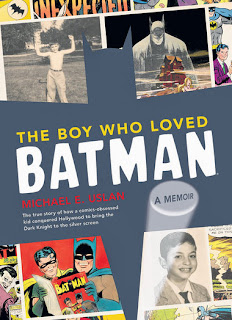 Comic-book geeks call it the "Bruce Wayne moment" — a pivotal incident that decides, with crystal clarity, one's mission in life.

In the comics, Wayne became the costumed crimefighter Batman after witnessing the murder of his parents in the street. Michael E. Uslan's Bruce Wayne moment came with the 1966 TV premiere of "Batman," the campy action comedy starring Adam West. Uslan, then a comics-obsessed 14-year-old, was not happy.

"I was in my den in Deal Park when the 'Batman' TV show came on the air," he says. "I was simultaneously thrilled and horrified by what I was seeing. I knew the whole world was laughing at Batman. That really killed me. This particular night, I decided somehow, some day, I would find a way to eliminate from the collective consciousness of the world three little words: 'pow,' 'zap' and 'wham.'
"That became my mission in life. I wanted to show everybody the true Batman, the way the guy was created in 1939 as a creature of the night stalking criminals from the shadows."

Uslan, a Jersey City native who grew up in Ocean Township, achieved that goal as executive producer of eight Batman movies beginning with the 1989 film "Batman," directed by Tim Burton, and including the forthcoming "The Dark Knight Rises," directed by Christopher Nolan. Uslan recounts his revenge-of-the-nerd story in a new memoir, "The Boy Who Loved Batman" (Chronicle Books).

Uslan's relationship with Batman began around age 5, when his older brother Paul took him to Irv's Luncheonette on Avenue A in Bayonne.

"I remember it like it was yesterday," says Uslan, 60, who lives in Cedar Grove. "Inside Irv's — behind the door as you walked in, right by the counter — was floor-to-ceiling comic-book racks. That's where I saw my first Batman comic book ever. My education began there."

His interest in comics accelerated after his family relocated to Ocean Township.

"My life quickly became centered around the eight places within bicycle-pedaling range of Ocean Township and Asbury Park that a boy could reach," he says.

Those eight places? Wanamassa Pharmacy, Allenhurst Pharmacy and Ricky's soda shop in Ocean; Deal Pharmacy and Deal Soda Shop in Deal; Andy's Soda Shop and Flo's luncheonette in Asbury Park; and a tobacconist that Uslan and friends called "the pit of terror," owing to its intimidating proprietor.

Uslan also frequented a back-date magazine dealer at the Collingwood Auction and Flea Market in Farmingdale.

"Every Friday," he recalls, "they used to bring in boxes and boxes from some strange, bizarre, 'Twilight Zone' place in New York somewhere. They would dump old, old, old comic books onto card tables and sell them for a nickel apiece. That's where I began to amass my collection.

"By the time I graduated Ocean Township High School (in 1969), I had a collection of 30,000 comic books dating back to 1936, which took up my folks' entire garage. My dad never got his car in the garage. Instead, he built shelves for me, floor to ceiling, around three walls of the garage."

Why did Uslan's parents indulge his hobby? The producer says his mother, Lillian, struck a deal with him: As long as he read other things like books and newspapers, he could continue collecting. "It's the greatest deal I have ever made in my life," Uslan says.

"You have to remember that back then, comic book collecting and reading was a very isolating hobby. Until fifth grade, I had no idea that there were any other kids around who did what I did. It was pretty much the kind of thing you did up in a tree house or underneath the covers at night with a flashlight."

Uslan's favorite character became Batman because — unlike Superman, Spider-Man and the Hulk — Batman had no super powers.

"I always contend that his greatest super power is his humanity," Uslan says.

"I kind of believed that I could be this guy."

While attending law school, Uslan wrote Batman stories for DC Comics. He became a production attorney for United Artists, where he learned the art of the deal. In 1979, Uslan acquired the movie rights to Batman with another New Jersey native, producer Benjamin Melniker, who was born in Bayonne. Uslan says that over the next 10 years, he pitched a Batman movie to every studio in Hollywood. "The doors kept slamming in my face," he says, "but I kept knocking until my knuckles bled."

It all led to the 1989 film "Batman," which broke box-office records and ignited a wave of superhero movies that continues to this day. At the premiere of "Batman," Uslan was star-struck — though not necessarily by actors. 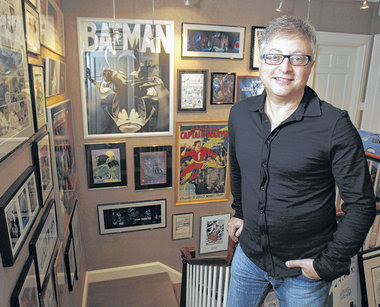 "Let me reveal the comic-book geek smoldering beneath the surface here," he says. "It seemed like every star in Hollywood was at the premiere. Who did yours truly hang out with the whole night? (Spider-Man creator) Stan Lee and (Batman creator) Bob Kane."

Uslan infused the Batman films with Jersey attitude by hiring fellow Shore guys to play baddies. Neptune's Jack Nicholson played the Joker in "Batman," and Asbury Park's Danny DeVito played the Penguin in "Batman Returns." During shooting, Uslan compared notes with Nicholson about hanging out at the Osprey Nightclub in Manasquan, and debated DeVito on the best pizza at the Shore. (For the record, Uslan's top choice is Freddie's, now in Long Branch.)

Uslan's doggedness has elicited admiration from another New Jerseyan, artist Joe Kubert, who is the namesake of the Kubert School in Dover, which has graduated many comics professionals. In 1975, Kubert illustrated the cover for the first Batman issue written by Uslan, and he was interviewed for the Uslan-produced documentary of 2007, "The Legends Behind the Comic Books."

"Mike has been a mover and a doer in movies and comics and everything that he's touched," Kubert says.

"I think what drives him is his undying interest, his wanting to know more and more. That's what informs his writing and producing movies like the Batman films. He's a straight guy, an honest guy."

Kubert, whose career dates back to 1939, appreciates that Uslan has always tipped his hat to the sometimes forgotten creators of beloved comic-book characters.

"That's only a reflection of what Mike feels about people getting their just desserts," Kubert says. "He feels very strongly that those who really are the innovators, the beginners, should be remembered. I think that's admirable."

Uslan believes the improbability of his story makes it worth putting into memoir form.

Says the producer: "For a blue-collar kid in New Jersey who didn't seem to have a prayer to have his dreams come true, to start making dark and serious Batman movies — I didn't come from money, so I couldn't buy my way into Hollywood. I didn't know anyone in Hollywood. So how do you get there from here?"

It came down to passion, Uslan maintains —- something he got from his father, Joseph, a stone mason ("best on the Shore") who loved his work.

"Growing up in that house, my brother Paul and I soon realized what we wanted out of life," Uslan says. "We wanted to be able to wake up on a rainy Monday morning and say, 'I can't wait to get to work.' I found my bricks and stones in the form of comic books and movies."
-----------
http://www.nj.com/entertainment/index.ssf/2011/08/dark_knight_rises_batman.html
Posted by pratanacoffeetalk at 8:38 AM