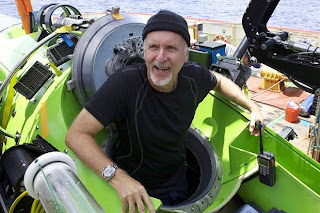 In James Cameron's fantasy films, like "Avatar" and "The Abyss," the unexplored is splashed in color and fraught with alien danger. But on his dive to the deepest place on Earth, reality proved far different: white, barren and bland.

Yet otherworldly -- and amazing.

"I felt like I literally, in the space of one day, had gone to another planet and come back," Cameron said Monday after returning from the cold, dark place in the western Pacific Ocean, seven miles (11 1/4 kilometers) below the surface. "It was a very surreal day."

Cameron is the first person to explore the deepest valley in the ocean since two men made a 20-minute foray there more than half a century ago. He spent about three hours gliding through the icy darkness, illuminated only by special lights on the one-man sub he helped design. That was only about half as long as planned because his battery ran low.

This deepest section of the 1,500-mile(2,415-kilometer)-long Mariana Trench is so untouched that at first it appeared dull. But there's something oddly dark and compelling about the first snippets of video that Cameron shot. It's not what you see, but where it puts you. There is a sense of aloneness that Cameron conveys in the wordless video showing his sub gliding across what he calls "the very soft, almost gelatinous flat plain."

"My feeling was one of complete isolation from all of humanity," Cameron said.

It may not have looked all that dramatic and, in a way, Cameron was "doing exploration with training wheels," said Andy Bowen, who heads the deep submergence lab at Woods Hole Oceanographic Institution.

But it was an amazing start.

The images "do lack the visual impact of highly colorized 3D spectacular representations of the ocean," Bowen said. But there are still "dramatic discoveries to be made."

The minute-long snippet, released by trip sponsor National Geographic, is just a coming attraction. Cameron will keep diving in the area, some 200 miles (322 kilometers) southwest of the island of Guam, where the depth of the trench is called Challenger Deep. And he's already filming it in 3D for later viewing.

To Cameron, the main thing was to appreciate just being there. He didn't do that when he first dove to the wreck of the Titanic, and Apollo astronauts have said they never had time to savor where they were.
"There had to be a moment where I just stopped, and took it in, and said, `This is where I am; I'm at the bottom of the ocean, the deepest place on Earth. What does that mean?"' Cameron told reporters during a conference call.

"I just sat there looking out the window, looking at this barren, desolate lunar plain, appreciating," Cameron said.

He also realized how alone he was, with that much water above him.

"It's really the sense of isolation, more than anything, realizing how tiny you are down in this big, vast, black, unknown and unexplored place," the "Titanic" director said.

Cameron said he had hoped to see some sort of strange deep sea creature that would excite the storyteller in him, but he didn't.

He didn't see tracks of small primitive sea animals on the ocean floor, as he did when he dove more than five miles (eight kilometers) down several weeks ago. All he saw was voracious shrimp-like critters no bigger than an inch (2.5 centimeters). In future missions, Cameron plans to bring "bait" -- like chicken -- to set out.

Cameron said the mission was all about exploration, science and discovery. He is the only person to dive there solo, using a lime-green sub called Deepsea Challenger. He is the first person to reach that depth -- 35,576 feet (10,843.5 meters) -- since it was initially explored in 1960.

There had been a race to reach the bottom among rich and famous adventurers. Sir Richard Branson, founder of the Virgin Group, has been building his own one-man sub to explore the ocean depths. Cameron's dive was "a fantastic achievement," Branson told The Associated Press.

Branson said he hoped to be the first to explore a different deep-sea location, diving later this year to the deepest part of the Atlantic, the Puerto Rican trench, which is only five miles from his home. Just shy of six miles deep, the area has not been explored yet.

Branson also hopes to join Cameron in a tandem dive of solo subs. "Together, we'll make a formidable team," he said.

While Cameron's dive was far longer than that of U.S. Navy Capt. Don Walsh and Swiss engineer Jacques Piccard 52 years ago, he didn't reach the trench walls because he was running low on battery power. He said he would return, as would the sub's Australian co-designer, Ron Allum.

"I see this as the beginning," Cameron said. "It's not a one-time deal and then moving on. This is the beginning of opening up this new frontier."

"To me, the story is in the people in their quest and curiosity and their attempt to understand."

The only thing that went wrong was a hydraulic failure that kept Cameron from collecting rocks and critters and bringing them back to land.

Science like this takes time, but Cameron is committed to doing it, said Woods Hole's Bowen, who ran a program that sent an unmanned sub to the same place in 2009.

"The reality of exploring such an environment is that at times it can be very boring; exploring these environments isn't always about some dramatic highly visual discovery," Bowen said. "The scientific process is exhausting and sometimes it takes a significant amount of sweat, if you will, to uncover secrets."

Cameron did sweat -- and shiver.

When the 6-foot-2 (1.87-meter) Cameron climbed into the cramped sub, his head hit one end and his feet the other. It was warm outside because it was near the equator; it was toasty inside, temperatures topping 100 degrees Fahrenheit (38 Celsius), because of the heat given off by the sub's electronics. It felt "like a sauna," he said.

But as he plunged into the deep, it grew cold inside the sub as the waters outside dropped to around 36 degrees (2 Celsius), he said.

The pressure on the sub was immense -- comparable to three SUVs resting on a toe. The super-strong sub shrank three inches under that pressure, Cameron said.

"It's a very weird environment," he said. "I can't say it's very comfortable. And you can't stretch out."