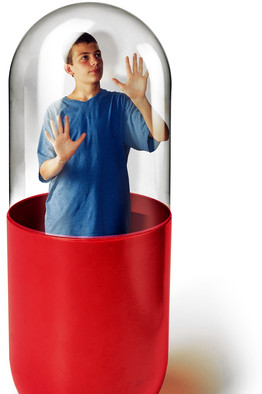 Many young people today have now spent most of their lives on antidepressants. Have the drugs made them 'emotionally illiterate'?

When I was a college freshman in the late 1990s, antidepressants were everywhere. Prozac was appearing on magazine covers, and I'd just seen my first commercial for Paxil on TV. Halfway through the semester, I was laid out by a prolonged anxiety attack and found myself in the school's campus health center, tearfully telling a newly minted psychiatry resident about my feelings of panic and despair. Given the spirit
of the times, it wasn't a complete surprise when she sent me away a few minutes later with a prescription and a generous supply of small cardboard boxes full of beautiful blue pills, free samples dropped off on campus by a company rep.


The school psychiatrist didn't suggest talk therapy. She simply asked that I return for a "med check" every few weeks to make sure that the pills were working.

Work they did. My dread burned off like valley fog in the sun, and my tears dried up as decisively as if someone had turned off a spigot. Soon I felt less anxious and more sociable than I could ever remember being.

When I started using antidepressants, I didn't know anyone else my age who was taking them. Within a few years, I felt hard-pressed at times to find someone who wasn't. Antidepressants and other psychiatric medications went mainstream in the 1990s and 2000s, and my generation became the first to use these drugs in significant numbers as adolescents and young adults. 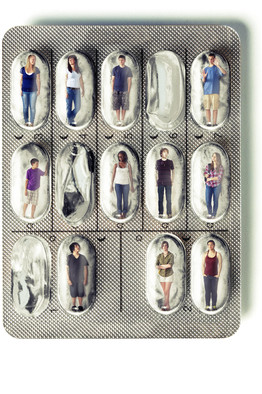 Young people are medicated even more aggressively now, and intervention often starts younger. In children, as in adults, antidepressants and medications for attention-deficit hyperactivity disorder are often used continuously for years. These trends have produced a novel but fast-growing group—young people who have known themselves longer on medication than off it.

The National Center for Health Statistics says that 5% of American 12- to 19-year-olds use antidepressants, and another 6% of the same age group use medication for ADHD—in total, about four million teenagers. Around 6% of adults aged 18 to 39 use an antidepressant. Usage often becomes long term. According to the U.S. Centers for Disease Control and Prevention, 62% of Americans aged 12 and over who take antidepressants have done so for two years or longer; 14% have taken them for 10 years or longer. Not all are well supervised. The National Center for Health Statistics reports that fewer than a third of patients of all ages who take an antidepressant have seen a mental-health professional within the past year.

Like me, most young adults who take antidepressants have felt relief from symptoms. But there are several aspects of the experience of growing up on antidepressants that should give us pause.

First, using antidepressants when you're young raises tough questions of personal identity. Adults who take these drugs often report that the pills turn them back into the people they were before depression obscured their true selves. But for adolescents whose identity is still under construction, the picture is more complex. Lacking a reliable conception of what it is to feel "like themselves," young people have no way to gauge the effects of the drugs on their developing personalities.

Emily, 28, grew up in the Midwest and began taking Prozac for the depression and anxiety that began to overwhelm her at age 14. (Like all the young people I interviewed, she agreed to talk on the condition of being identified by a pseudonym.) She has used it nearly continuously since. Emily is confident that Prozac helps her, even crediting it with allowing her to work. Even so, she describes a painful and persistent desire to know what she would be like without medication.

"I think Prozac has helped me a lot," she said. "But I wonder, if I'd never gotten antidepressants, who would I be? What would I be like?" Emily hasn't satisfied her curiosity by taking a break from the drug, largely because she doubts that she would be able to withstand the pressures of her job without it.

It's easy to make fun of the question "Who am I?", or to dismiss not being able to know one's "true self" as a relatively minor side effect, especially when compared with the ravages of major depression. But most of us do want to have a strong sense of our own personality and temperament; it is something that we rely on to balance our lives from day to day.

For adolescents, who are already struggling with these questions, medication can distort the development of self-awareness. "Because teens are presented with the question of 'Who am I?', being a person who takes medication gets included in that quest," says Lara Honos-Webb, a clinical psychologist in Walnut Creek, Calif. Sometimes they do it in a negative way, she says, either by dwelling on the idea of being a person with a sickness or focusing on their inability to know whether their

A related issue is sexuality. It is well known that antidepressants can blunt sexual desire and performance; studies estimate that these effects may occur in more than half the people who take the drugs. Timothy Dugan, a child and adolescent psychiatrist at Harvard's Cambridge Hospital, notes that the impact of antidepressants on young-adult sexuality hasn't been studied much and is poorly understood. "If Freud's right, then sexuality should drive development, and drive connections with other people," he says. "If you're a kid, and your sexual desires are somehow fooled with or messed with, what does that do?"

Finally, there are the consequences of teaching young people to think about their problems in biomedical terms. In the past 25 years, antidepressants have helped to move us from a culture that viewed emotional problems as products of personal psychology, to one that views at least many negative feelings in terms of faulty biology—a chemical imbalance. The acceptance of depression as a biological illness has been hailed for removing shame and stigma from the condition. But when we overextend the biomedical model, applying it to troubled young people who may not be suffering predominantly, or at all, from a biological mental disorder, we discourage them from examining the roots of their feelings, and from exploring other ways of managing them.

When I first began to take antidepressants, I understood that doing so meant I had a chemical imbalance in my brain. I knew that, arguably, I should find that comforting—it meant that what I was going through wasn't my fault—but instead it made me feel out of control. I wanted my feelings to mean something. The idea that my deepest emotions were actually random emanations from my malfunctioning brain didn't uplift me; it just further demoralized me.

In my 20s, I sought out talk therapy, partly to deal with the questions that using antidepressants raised for me and partly because the effects of the drugs, spectacular in the short term, had waned over time, leaving plenty of real-world problems in their wake. Only then did I begin to notice just how nonrandom my feelings were and how predictably they followed some simple rules of cause and effect.

Looking back, it seems remarkable that I had to work so hard to absorb an elementary lesson: Some things make me feel happy, other things make me feel sad. But for a long time antidepressants were giving me the opposite lesson. If I was suffering because of a glitch in my brain, it didn't make much difference what I did. For me, antidepressants had promoted a kind of emotional illiteracy. They had prevented me from noticing the reasons that I felt bad when I did and from appreciating the effects of my own choices.

As medications saturate our culture, we may be growing less able to connect our most basic feelings with the stressful factors in our lives. "There's been a kind of pathologization of life itself," said David Ramirez, a clinical psychologist and the head of counseling and psychological services at Swarthmore College in Pennsylvania. "Life is full of stress, and anxiety, and sadness—those are just base-line phenomena that have come to be considered illnesses that need to be treated. Young people aren't sure how to think about their distress."

The point is emphatically not that these medications are useless, simply that they are overprescribed. Drugs undoubtedly help many young people who are genuinely struggling. But the expanding use of psychiatric medication in youth over the last 20 years has meant that the drugs are now prescribed in less and less severe cases. In fact, it's tempting to see the rapid spread of these medications less as evidence of an epidemic of youthful mental illness than as part of a broader social trend toward aggressively managing risk in the lives of children and teens.

The desire to protect kids and help them to succeed is hard to fault in itself. But pushed too far, it can lead to unnecessary prescriptions that cause pain or harm in their own right. Though psychiatric medications have become part of the fabric of modern childhood and adolescence, they are powerful drugs, and we owe it to the next generation to use them with caution.

When medication is the right decision, there are ways that we can help to mitigate its negative impact. Adolescents who take medication should be encouraged to build an identity that is based on more than just an idea of being sick, and to talk about any issues that medication raises for them. Most important perhaps, the need for their prescription should be periodically reassessed.

I don't have the solution to depression. I do know that for me, taking medication was a very mixed experience. It melted my sadness and lifted my despair. But it also made me feel damaged, lacking in agency, and cut off from the ability simply to be myself.

Whether growing up on antidepressants or other psychiatric drugs causes lasting harm or benefit is an open question. Benedetto Vitiello, a child and adolescent psychiatrist at the National Institute of Mental Health, told me that, though research has proved the short-term benefit of certain psychiatric drugs in kids and adolescents, studies assessing the drugs' long-term effects have proved difficult to design. Does growing up on medication influence the way we hold jobs, maintain relationships, function in adult life? These are the key questions for future researchers.

As people who grow up on antidepressants settle into their adult lives, they face a question: Should they stay on their medications or try to stop taking them? Are they still the same people who first needed treatment years ago? Some of the people who told me their stories remain committed to medication. They found that the existential questions posed by the drugs grew less intense and painful as they left adolescence behind. Others experimented with going off their prescriptions, as I did. Some returned to medication with a greater sense of certainty. Others found life manageable and rewarding without it.

People from both groups said there are things that can help along the way, independent of drugs. The simple passage of time makes us more stable and self-aware. Learning how exercise, diet and sleep bear on mood gives us tools to use in caring for ourselves. Friends lend support, and adults help by sharing perspective and setting examples.

In my own case, talk therapy was vital. Though it didn't make the pain go away, it did enable me to do something medication hadn't, which was to talk and think about myself. It gave me a chance to have someone else confront my pain not as disorder but as part of the human experience. And that made it bearable.