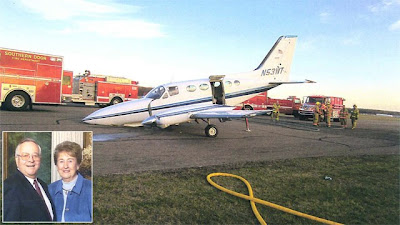 An 80-year-old woman with little flying experience knew her husband had died after he fell unconscious at the controls of a small plane, yet she remained calm as she landed the aircraft at a US airport, her son said.

James Collins said he is also a pilot and he helped his mother Helen Collins via radio as the Cessna twin-engine plane began running out of fuel on Monday evening.

Another pilot also took to the skies to guide her to the ground at Cherryland Airport, near Sturgeon Bay, Wisconsin, about 150 miles north of Milwaukee.

He said his mother took lessons to take off and land about 30 years ago at her husband's urging, in case something happened to him, but never got her licence. She has flown hundreds of hours by his side.

"At one point she didn't even want the wingman to go up," Mr Collins said. "She said, 'Don't you guys think I could do this on my own? Don't you have confidence in me?' She was calmer than everybody on the ground. She had it totally under control." 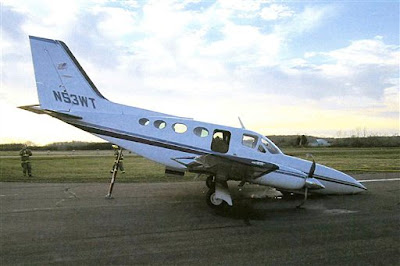 They were coming back from their second home in Marco Island, Florida, for Easter, Mr Collins said.

His 81-year-old father, John Collins, had a heart attack about seven minutes from landing at Cherryland Airport and had called her to the cockpit before he became unconscious, Collins said. She had called police dispatchers, and that's when everyone came together to help her down.

The pilot who helped was Robert Vuksanovic, who lived just a mile from the airport, said Keith Kasbohm, director of Cherryland Airport. After getting the call from Mr Kasbohm, Mr Vuksanovic jumped in another plane owned by the Collins family and flew up to meet the Cessna while instructing the novice on the radio.

Mr Collins said his mother was taken to hospital with an injury to her vertebrae and a cracked rib but was doing well. He said he stayed calm and focused because he had to help her.

He described his mother's actions as unbelievable, answering their questions about air speed or the flaps.
"Everybody is proud of her," he added. "I think she is a local hero for sure."