THE MYSTERY OF THE MARINE MONSTER ON SOUTH CAROLINA BEACH 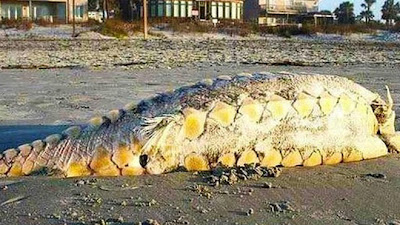 A bizarre creature that washed ashore last week in Folly Beach, S.C., sparked speculation in the area and on the Internet that a dead sea monster might have been discovered.

The tan-brown animal with greenish patches was strange enough, but what really baffled beachgoers was its massive size and the dinosaur-like bony plates on its sides. It's not clear just how long it was, but photos suggest it exceeded 10 feet.

Like many washed-up carcasses it carried both a salty stench and an air of mystery. Speculation ran rampant, with commenters suggesting that the creature was everything from a dinosaurian sea monster to a toxin-spawned mutation to a chupacabra.

Scientists, however, were somewhat more skeptical.

One of the first to identify the monster was Dr. Shane Boylan of the South Carolina Aquarium. Two big clues allowed Boylan to identify the fish more or less immediately: the animal's shape and distinctive bony plates.

The marine monster was in fact an Atlantic sturgeon. Part of the reason the giant fish's identity was difficult to determine is that sturgeon are not normally the strange brownish tan color but instead lighter colored and silvery. The South Carolina monster's flesh color had changed as it baked in the sun. The dinosaur identification was actually pretty close to accurate; sturgeon are among the oldest bony fish in existence.

It's not surprising that the sturgeon scared and confused people; Atlantic sturgeon have been known to reach 15 feet long and weigh over 500 pounds; seeing the beasts close-up is not for the faint of heart.

The South Carolina monster was only the latest of several creatures to wash ashore in recent months. In early February a strange, seemingly mohawked toothy monster was found on a San Diego beach. It was soon identified as an opossum.


There’s a new monster on San Diego beaches, and he looks rough.
He’s got a bleach-blonde mohawk, sunburned skin, and a pair of really vicious-looking fangs. And don’t even ask about the body odor, which is bad enough to draw flies. But don’t worry, he (or she) is dead. (Though, like all movie monsters, it might come back to life at the last moment, setting up a sequel.)
Photos of the 24-inch animal carcass were taken last week by a 19-year-old snowboarder visiting San Diego’s Pacific Beach. He showed them to a friend, who passed it along to another friend, who e-mailed them to Rocco Castoro of the Vice.com blog with the subject line: “Chupacabra/Montauk Monster-looking creature.”
As Castoro noted,
The Ten Commandments of the Internet dictate that anyone who receives images of a "monster" is obligated to disseminate and investigate them, even though incidents like this seem to happen about once a year these days. This one apparently turned up on Pacific Beach in San Diego last week.” Castoro spoke to the man who found it, and the surfer dude “sounded sincere and naive enough (i.e. like Jeff Spicoli) to convince me that he undoubtedly believes this thing was, at one time, a living and breathing mutant hellbeast, or at the very least a member of the aforementioned Chupacabra genus. He also told me it was about two feet in length, and that ‘it had the body shape of a pig—kind of a fat stomach, middle area. And the canines were just ridiculously large.... I didn't know if it was some creature from around here. I'm from Massachusetts and I don't see [stuff] like that ever.’”


Other Fish Mistaken for Monsters

Other normal fish besides the sturgeon have been mistaken for monsters, including oarfish and gar.
Oarfish, which are long, serpentine, nearly finless fish with large round eyes, often average 20 or 30 feet but have been reported over 50 feet long. Earlier this year, in January a huge ribbon-like monstrous fish that washed ashore in Delray Beach, Florida, was identified as an oarfish.

Several sightings of gar (freshwater and marine fish which can grow over 10 feet long and reach over 350 pounds) have also been mistaken for monsters. In fact, some believe that "Champ," the lake monster said to inhabit Lake Champlain (on the border between Vermont and New York), was first sighted in 1609 by French explorer Samuel de Champlain.

In his journal Champlain wrote of local Indians describing a fish with "a head as large as my two fists, with a snout two feet and a half long, and a double row of very sharp, dangerous teeth. Its body has a good deal the shape of the pike; but it is protected by scales of a silvery gray color."

Though often claimed as an eyewitness report of "America’s Loch Ness Monster," his description is clearly that of a sturgeon-like gar fish.

Another reason that the sturgeon seemed monstrous was that it's an unusually large fish.

The fish most people (and certainly most urban dwellers) encounter are relatively small -- goldfish perhaps, or aquarium fish. Sport fishermen, butchers and marine biologists are far more likely to recognize large fish such as tuna, sturgeon and gar, for example, which often grow to surprising sizes.

Even seeing large fish on television, in aquariums or in photographs does not necessarily prepare city-dwelling beachgoers for real-life encounters with a beached, smelly giant.