JAMES BOND WILL OPEN THE 3Oth SUMMER OLYMPICS IN LONDON 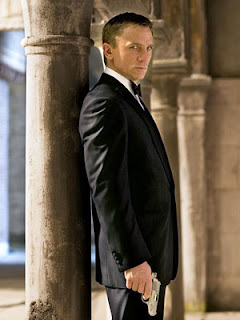 The 30th Summer Olympics will kick off with an appearance from 007.

After a special invitation from Queen Elizabeth II, James Bond star Daniel Craig reportedly filmed scenes this week at Buckingham Palace that will be used during the opening ceremony of the London Games.

Craig and the ceremony's creative director, Danny Boyle, were given unprecedented access to the Queen's private quarters to shoot the scenes.

The Sun reports that the Bond character will play a large role during the July 27 extravaganza. Details are sparse, but the fictional MI6 agent will receive orders from the Queen to open the Games and will parachute into Olympic Stadium by helicopter in the short film, which is being known as, "The Arrival."


"They wanted the most iconic British film character inside the building most associated with London and with the monarch – and they got it," a source told the British newspaper. "It will be a magical scene for all watching at home and inside the stadium on July 27."

If it was a coup for the Olympics to get James Bond and the Queen, it's an equal coup for MGM. Craig's newest Bond film, "Skyfall," is scheduled to be released Nov. 9. Having more than one billion people see the character at the opening ceremony won't be bad for marketing.