9 WAYS TO GET IDEAS 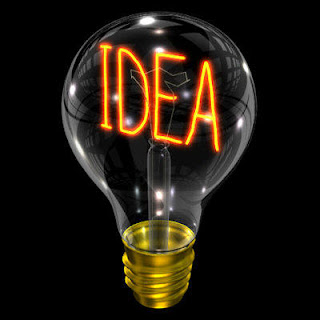 An easy way to generate a lot of ideas is to apply a checklist of nine creative-thinking principles that were first formally suggested by Alex Osborn and later arranged into the following mnemonic SCAMPER.

SCAMPER is based on the notion that everything new is some addition or modification of something that already exists. You take a subject and change it into something else. (E.g., drilled petroleum becomes chemical feedstock becomes synthetic rubber becomes automobile tires. Natural gas becomes polyethylene becomes milk jugs. Mined ore becomes metal becomes wire becomes parts of a motor.)you can take anything that exists and change it into a new idea.


The blueprint for using SCAMPER is:
(1) Isolate the subject you want to think about.
(2) Ask the SCAMPER questions about each step of the subject and see what new ideas emerge.
(3) For every new idea you discover, ask "How can...?" "What else...?" "How else...?"
(4) List and evaluate the ideas.

Suppose you wanted to improve the ordinary paperclip? You would start looking for ideas by asking:

One manufacturer substituted plastic for metal, added color, and produced plastic clips in various colors so that clipped papers could be color-coded thereby finding another use for clips.

Think about any subject from improving your productivity to reorganizing your organization and apply the AScamper@ checklist of questions. You will find that ideas start popping up almost involuntarily, as you ask:

SUBSTITUTE SOMETHING? The principle of substitution is a sound way to develop alternative ideas to anything that exists. Think up ways of changing this for that and that for this. The scientist, Paul Ehrlich, kept substituting one color for another---well over 500 colors---until he found the right dye to color the veins of laboratory mice. You can substitute things, places, procedures, people, ideas, and even emotions. Ask:

Can you substitute something? Who else? What else?
Can the rules be changed?
Other ingredient? Other material? Other power? Other place? Other approach?
What else instead? What other part instead of this?

COMBINE IT WITH SOMETHING ELSE? Much of creative thinking involves combining previously unrelated ideas or subjects to make something new. This process is called synthesis, and is regarded by many experts as the essence of creativity. Gregor Mendel created a whole new scientific discipline, genetics, by combining mathematics with biology. Ask:

What can be combined?
Can we combine purposes?
How about an assortment? A blend? An alloy? An ensemble?
Combine units? Combine materials? What other article could be merged with this?
How could we package a combination?
What can be combined to multiply possible uses?
Combine appeals?

ADAPT SOMETHING TO IT?  One of the paradoxes of creativity is that in order to think originally, we must first familiarize ourselves with the ideas of others. Thomas Edison put it this way: "Make it a habit to keep on the lookout for novel and interesting ideas that others have used successfully. Your idea needs to be original only in its adaptation to the problem you are working on." Ask:

MAGNIFY IT? An easy way to create a new idea is to take a subject and add something to it. Japanese engineer Yuma Shiraishi made the home VCR possible by figuring out how to lengthen videotapes so they would be long enough for feature-length movies. Ask:

MODIFY IT? What can be modified? Just about any aspect of anything. The hub-and-spoke transportation system that makes Federal Express work was a feature of at least three air freight services as early as 1930. What Fred Smith did was to modify the dimensions, process and purposes of the system and turned an old idea into an elegant concept. Ask:

How can this be altered for the better? What can be modified?
Is there a new twist?
Change meaning, color, motion, sound, odor, form, shape? Change name?
What changes can be made in the plans? In the process? In marketing? Other changes?
What other form could this take? What other package? Can the package be combined with the form?

PUT IT TO SOME OTHER USE? A subject takes its meaning from the context in which you put it. Change the context, and you change the meaning.  George Washington Carver, botanist and chemist, discovered over 300 different uses for the lowly peanut. Ask:

What else can this be used for?
Are there new ways to use as is?
Other uses if modified?
What else can be made from this?
Other extension? Other markets?

ELIMINATE? Sometimes subtracting something from your subject yields new ideas. Trimming down ideas, objects, and processes may gradually narrow the subject down to its truly necessary part or function--or spotlight a part that=s appropriate for some other use. Ask:

What if this were smaller? Understate?
What should I omit? Delete? Subtract? What=s not necessary?
Should I divide it? Split it up? Separate it into different parts?
Streamline? Make miniature? Condense? Compact?
Can the rules be eliminated?

REARRANGE IT INTO SOMETHING ELSE? Creativity, it could be said, consists largely of rearranging what we know in order to find out what we do not know. Rearrangement usually offers countless alternatives for ideas, goods, and services. A baseball manager, for example, can shuffle his lineup 362,880 times. Ask:

What other arrangement might be better?
Interchange components?
Other pattern? Other layout? Other sequence? Change the order?
Transpose cause and effect?
Change pace? Change schedule?

REVERSE IT TO SEE WHAT HAPPENS? Reversing your perspective opens your thinking. Look at opposites and you'll see things you normally miss. Ask "What is the opposite of this?" to find a new way of looking at things. The historical breakthroughs of Columbus and Copernicus were the polar opposites of the current beliefs of their day. Ask:

What are the opposites?
What are the negatives?
Can I transpose positive and negative?
Should I turn it around? Up instead of down? Down instead of up? Consider it backwards?
Reverse roles?
Do the unexpected?

Even the hot dog, as we know it, is the result of the right idea-spurring question being asked at the right time. Antoine Feutchwanger sold sausages at the Louisiana Exposition in 1904. He first sold them on plates, but this proved too expensive. He then offered white cotton gloves along with the franks to prevent customers from burning their fingers. The gloves also were expensive, and customers walked off with them. Antoine and his brother-in-law, a baker, sat down and brainstormed. "What could be added (MAGNIFY) to the frankfurter that would be inexpensive and would prevent people from burning their fingers?" His brother-in-law said: "What if I baked a long bun and slit it to hold the frank?" "Then you can sell the franks, and I can sell you the buns. Who knows, it might catch on.

Michael Michalko is the author of the highly acclaimed Thinkertoys: A Handbook of Creative Thinking Techniques; Cracking Creativity: The Secrets of Creative Genius; ThinkPak: A Brainstorming Card Deck and Creative Thinkering: Putting Your Imagination to Work.
-----------
http://www.creativitypost.com/create/nine_easy_ways_to_get_ideas
http://www.inspiresme.co.uk/inspiresme/media/Media/LibraryFiles/Starting%20up/BUSINESS-IDEA.jpg
Posted by pratanacoffeetalk at 6:00 AM