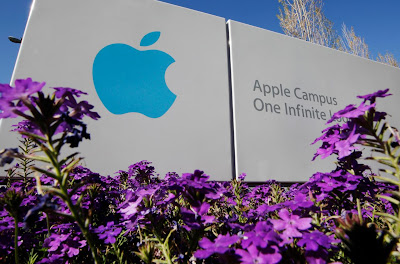 CUPERTINO, Calif. (AP) — Apple headquarters is still standing in this leafy Silicon Valley suburb even after Steve Jobs' industry-rattling announcement that he was resigning as chief executive of the company he co-founded in a garage more than three decades ago.

That news comes as little surprise in the Valley, where few doubted Thursday that despite the loss of its legendary leader Apple would continue to succeed — at least for the next few years.

"I don't think in the short term it will suffer," said Ethan Salter, 35, an engineering consultant who had stopped in at a Starbucks just down the road from the Mountain View headquarters of Google Inc., a major Apple competitor. "In the long term, things change really quickly around here."

Tech workers interviewed by The Associated Press said they were not shocked to hear Wednesday that Jobs was stepping down. His health troubles, which have included pancreatic cancer and a liver transplant, are well known.

Yet in a place where the lightning speed of success is matched perhaps only by the careening pace of failure, some wondered whether Jobs' departure could ultimately lead to a turn in its fortunes.

Apple itself floundered for a decade after Jobs left the company, and its rise to its current success did not begin until he returned in the late 1990s, cementing his image as the key to the company's success.
"Last time he left Apple, it wasn't so pretty," said Aaron Wegner, 31, a computer programmer at Lawrence Livermore National Lab in Silicon Valley for the day.

"I think he's a driving force behind what their products end up physically looking like."
Jobs' reputation as a micromanager of Apple's design process has both helped and hindered the company. The company's string of successes over the past decade has convinced many consumers and investors that with Jobs in charge the company couldn't fail. The flip side of that confidence is an anxiety about whether the company will falter without him.

Mi Young, 43, a business operations manager at a small computer networking company in Santa Clara, said she doubts Jobs would have stepped down without a plan in place.

Many of the ideas to come out of Apple in the next five years she believes will still bear Jobs' stamp. "Beyond that, I don't know who will be able to fill those shoes."

Part of the concern among Apple fans hinges on how heavily the company itself has relied on Jobs' cult of personality to market its innovative products.

His onstage appearances to unveil Apple's newest designs draw thousands of adoring fans and hundreds of journalists who broadcast his every word around the globe.

"There's this identification of the company with the man," said Alex Bochannek, curator at the Computer History Museum in Mountain View. That kind of identification is not unique to Apple in the history of computer companies and leads to the assumption that these large, complex organizations are run singlehandedly, he said.

But Jobs has clearly surrounded himself with smart people, Bochannek said, such as lead designer Jonathan Ive, best known to the public as the stylish Brit who extolls Apple's latest products in the company's online marketing videos.

"I don't think anyone thinks Apple is going away tomorrow," he said. At the same time, he said, "ultimately it's the leader who creates a culture."

While Apple's focus on attractive design and ease of use has fostered a culture of innovation, heavy secrecy is also a cornerstone of its operations.

The veil the company drapes over its inner workings encourages a furious online trade in speculation and rumors about Apple and its products.

Outside the company's Cupertino headquarters Thursday, Apple employees were unsurprisingly tight-lipped about their boss' decision, saying they're under strict orders not to talk to reporters.
"It's called job security," one employee said.

Jobs' replacement as CEO is Tim Cook, a longtime Apple executive who has temporarily filled the spot when Jobs has gone on medical leave. While no one including Cook can currently match Jobs' tech industry star power, some longtime industry observers say the key to Apple's future success lies in how much attention it can continue to draw to its products, not its leader.


By MARCUS WOHLSEN, Associated Press
Marcus Wohlsen can be reached on Twitter at http://twitter.com/marcuswohlsen
--------
http://www.google.com/hostednews/ap/article/ALeqM5gHFc7YMOdcd4b5ltxDsprLV0AuKA?docId=49c6297cae274034bbab938aa03a04cd
Posted by pratanacoffeetalk at 4:19 PM