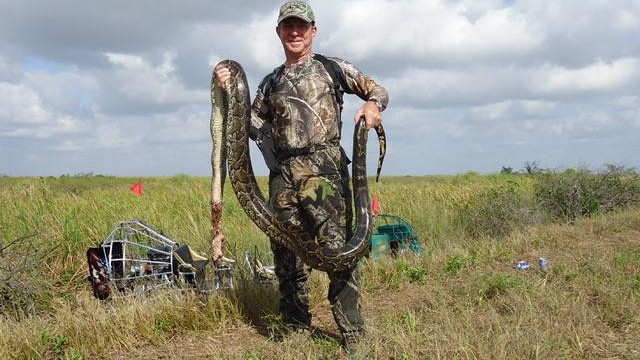 A new prize in the Florida python hunt has been announced and everybody wins.

The two men who caught the giant Burmese python collected a $1,000 prize. The giant snake was released back into the Everglades. And Florida wildlife experts expect the python -- outfitted with a pair of transmitters -- to show them where to find the thousands of snakes hiding in the wild and lead them to breeding females.

Two other pythons were also implanted with transmitters and sent back into the wild.

"It's breeding time and females attract males and we have three eager young lads sitting out there with radio transmitters on them who can lead us to the breeding female and we can catch her," Frank Mazzotti, professor of wildlife at the University of Florida who helped organize the challenge, told ABC News.

The Florida Python Challenge ended on this weekend with the round up of a mere 68 snakes. Officials held the snake hunt because the pythons have multiplied into the thousands in the Everglades and have become a threat to native species.

Mazzotti was not deterred by the number of snakes captured.

"We've never collected so many pythons in such a short period of time. It really is an unprecedented sample," he said. "It provides us with a sort of autopsy of the wildlife. There's going to be recommendations coming out of this that will help us be able to remove more snakes from the wild."

Initially the prize for the longest snake went to a man who brought in a 10-foot long python, but on Sunday another longest snake prize was given to Blake Russ and Devin Belliston of Miami who wrangled an 11-foot long python. The error in measurement, according to Mazzotti, has to do with the difficulty of measuring a live python.

Mazzotti worked with the Florida Fish and Wildlife Conservation Commission to design the challenge. The challenge's purpose was to not only remove Burmese pythons from the Everglades, but to also collect data from the snakes that were euthanized, and to track the three which were tagged with transmitters.

Mazzotti said the department weighed the risks of releasing the tagged pythons, but to ensure they can be recaptured, two transmitters were implanted in each snake. If one transmitter were to fail, another one would take its place.

"I absolutely never want to explain to someone that we left a snake out in the wild, so we make sure to put two transmitters in them so that they can be tracked," Mazzotti said.

The tagged pythons help Mazzotti and his team determine the full extent of the invasion both in terms of location and habits.

"Many of the snakes we catch we catch along roads, and we learn where else in the landscape they go. We also learn basic activity patterns. We then use that information to find when the best time to look for them and to remove them is."

Mazzotti plans to recapture the three snakes in April at the end of the breeding season. That's when Mazzotti hopes they'll be led to pregnant female snakes, which can also be captured and prevented from releasing baby pythons into the ecosystem.

Because the pythons are such a large predator, and aren't native to the Everglades, they have a negative effect on the top down food structure of the ecosystem.

Until the snakes are recaptured, Mazzotti and his team will focus on analyzing the data they collected from the 65 snakes which were euthanized. This data includes dietary and mercury samples.

Posted by pratanacoffeetalk at 4:44 PM