THE EVIDENCE THAT CHOCOLATE HELPS PEOPLE SLIM IS UNCERTAIN, EVEN THE STUDY SAY YES. 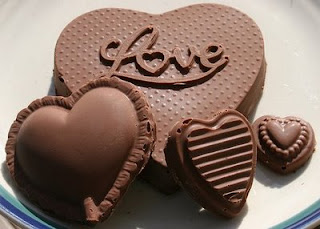 I love studies telling me that chocolate will help me live longer, improve my blood pressure, or boost my mood, and I’m especially delighted to hear about a new finding published Monday, which found that frequent chocolate eaters tend to weigh less than those who don’t indulge. I take all these with a grain of salt since they’re population studies that make associations but don’t prove a cause and effect.

“Chocolate is my favorite vegetable, and I say that only half-jokingly,” said study author Dr. Beatrice Golomb, an associate professor of medicine at the University of California-San Diego. Golomb considers chocolate a plant food because, besides milk and sugar, it consists primarily of chocolate and cocoa butter made from the cocoa bean.

(The study wasn’t financed by the chocolate industry, though Golomb and her two co-authors disclosed “an anti-conflict via their chocolate purchasing habits.”)

While cocoa butter is rich in stearic acid -- a saturated fat -- it’s considered to have a favorable effect on cholesterol levels, said Golomb, because it raises the “good” HDL component without raising the “bad” LDL.

But looking at the label of a candy bar, it’s tough to see how chocolate could actually help keep weight off: a plain 43-gram Hershey bar contains 210 calories, 13 grams of fat, and 24 grams of sugar.

Oddly, those in the study who ate chocolate several times a week had somewhat higher calorie intakes than those who never or rarely ate chocolate, according to the study, which was published online as a research letter in the Archives of Internal Medicine, The chocolate lovers also weren’t any more likely to exercise or eat fruits and vegetables, both of which affect body weight, compared with the non-chocolate eaters.

Golomb speculated that different foods may have different effects on the body’s metabolism and that perhaps chocolate may trigger a slight calorie-burning boost. Other research suggests that the calories in/calories out paradigm for body weight may be more complicated than once thought.

While Golomb enjoys partaking in chocolate, she declined to provide advice about how much chocolate people should eat based on her study -- which only looked at frequency of consumption, not amount.

No nutritionist, however, would advocate eating a candy bar a day for weight loss. The amount eaten in other studies linking chocolate consumption to longer lifespan and lower blood pressure was about 4 grams a day -- about one-tenth of that Hershey bar.

Golomb’s advice: If you’re going to reach for an Oreo or Devil Dog, grab a few chocolate squares instead. “I think it’s fair to call chocolate a real food in the sense that it contains real plant-based nutrients, as opposed to packaged cookies or pastries that are filled with artificial flavorings,” she said.