THE NEW GROUPTHINK IS RISING 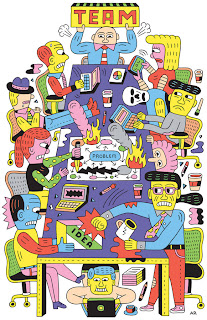 SOLITUDE is out of fashion. Our companies, our schools and our culture are in thrall to an idea I call the New Groupthink, which holds that creativity and achievement come from an oddly gregarious place. Most of us now work in teams, in offices without walls, for managers who prize people skills above all. Lone geniuses are out. Collaboration is in.

But there’s a problem with this view. Research strongly suggests that people are more creative when they enjoy privacy and freedom from interruption. And the most spectacularly creative people in many fields are often introverted, according to studies by the psychologists Mihaly Csikszentmihalyi and Gregory Feist. They’re extroverted enough to exchange and advance ideas, but see themselves as independent and individualistic. They’re not joiners by nature.

One explanation for these findings is that introverts are comfortable working alone — and solitude is a catalyst to innovation. As the influential psychologist Hans Eysenck observed, introversion fosters creativity by “concentrating the mind on the tasks in hand, and preventing the dissipation of energy on social and sexual matters unrelated to work.” In other words, a person sitting quietly under a tree in the backyard, while everyone else is clinking glasses on the patio, is more likely to have an apple land on his head. (Newton was one of the world’s great introverts: William Wordsworth described him as “A mind for ever/ Voyaging through strange seas of Thought, alone.”)

Solitude has long been associated with creativity and transcendence. “Without great solitude, no serious work is possible,” Picasso said. A central narrative of many religions is the seeker — Moses, Jesus, Buddha — who goes off by himself and brings profound insights back to the community.

Culturally, we’re often so dazzled by charisma that we overlook the quiet part of the creative process. Consider Apple. In the wake of Steve Jobs’s death, we’ve seen a profusion of myths about the company’s success. Most focus on Mr. Jobs’s supernatural magnetism and tend to ignore the other crucial figure in Apple’s creation: a kindly, introverted engineering wizard, Steve Wozniak, who toiled alone on a beloved invention, the personal computer.

Rewind to March 1975: Mr. Wozniak believes the world would be a better place if everyone had a user-friendly computer. This seems a distant dream — most computers are still the size of minivans, and many times as pricey. But Mr. Wozniak meets a simpatico band of engineers that call themselves the Homebrew Computer Club. The Homebrewers are excited about a primitive new machine called the Altair 8800. Mr. Wozniak is inspired, and immediately begins work on his own magical version of a computer. Three months later, he unveils his amazing creation for his friend, Steve Jobs. Mr. Wozniak wants to give his invention away free, but Mr. Jobs persuades him to co-found Apple Computer. 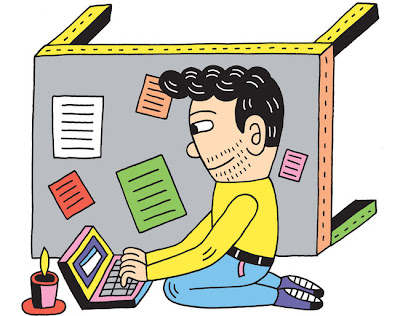 The story of Apple’s origin speaks to the power of collaboration. Mr. Wozniak wouldn’t have been catalyzed by the Altair but for the kindred spirits of Homebrew. And he’d never have started Apple without Mr. Jobs.

But it’s also a story of solo spirit. If you look at how Mr. Wozniak got the work done — the sheer hard work of creating something from nothing — he did it alone. Late at night, all by himself.

Intentionally so. In his memoir, Mr. Wozniak offers this guidance to aspiring inventors:

“Most inventors and engineers I’ve met are like me ... they live in their heads. They’re almost like artists. In fact, the very best of them are artists. And artists work best alone .... I’m going to give you some advice that might be hard to take. That advice is: Work alone... Not on a committee. Not on a team.”

And yet. The New Groupthink has overtaken our workplaces, our schools and our religious institutions. Anyone who has ever needed noise-canceling headphones in her own office or marked an online calendar with a fake meeting in order to escape yet another real one knows what I’m talking about. Virtually all American workers now spend time on teams and some 70 percent inhabit open-plan offices, in which no one has “a room of one’s own.” During the last decades, the average amount of space allotted to each employee shrank 300 square feet, from 500 square feet in the 1970s to 200 square feet in 2010.

Our schools have also been transformed by the New Groupthink. Today, elementary school classrooms are commonly arranged in pods of desks, the better to foster group learning. Even subjects like math and creative writing are often taught as committee projects. In one fourth-grade classroom I visited in New York City, students engaged in group work were forbidden to ask a question unless every member of the group had the very same question.

The New Groupthink also shapes some of our most influential religious institutions. Many mega-churches feature extracurricular groups organized around every conceivable activity, from parenting to skateboarding to real estate, and expect worshipers to join in. They also emphasize a theatrical style of worship — loving Jesus out loud, for all the congregation to see. “Often the role of a pastor seems closer to that of church cruise director than to the traditional roles of spiritual friend and counselor,” said Adam McHugh, an evangelical pastor and author of “Introverts in the Church.”

SOME teamwork is fine and offers a fun, stimulating, useful way to exchange ideas, manage information and build trust.

But it’s one thing to associate with a group in which each member works autonomously on his piece of the puzzle; it’s another to be corralled into endless meetings or conference calls conducted in offices that afford no respite from the noise and gaze of co-workers. Studies show that open-plan offices make workers hostile, insecure and distracted. They’re also more likely to suffer from high blood pressure, stress, the flu and exhaustion. And people whose work is interrupted make 50 percent more mistakes and take twice as long to finish it.

Many introverts seem to know this instinctively, and resist being herded together. Backbone Entertainment, a video game development company in Emeryville, Calif., initially used an open-plan office, but found that its game developers, many of whom were introverts, were unhappy. “It was one big warehouse space, with just tables, no walls, and everyone could see each other,” recalled Mike Mika, the former creative director. “We switched over to cubicles and were worried about it — you’d think in a creative environment that people would hate that. But it turns out they prefer having nooks and crannies they can hide away in and just be away from everybody.”

Privacy also makes us productive. In a fascinating study known as the Coding War Games, consultants Tom DeMarco and Timothy Lister compared the work of more than 600 computer programmers at 92 companies. They found that people from the same companies performed at roughly the same level — but that there was an enormous performance gap between organizations. What distinguished programmers at the top-performing companies wasn’t greater experience or better pay. It was how much privacy, personal workspace and freedom from interruption they enjoyed. Sixty-two percent of the best performers said their workspace was sufficiently private compared with only 19 percent of the worst performers. Seventy-six percent of the worst programmers but only 38 percent of the best said that they were often interrupted needlessly.

Solitude can even help us learn. According to research on expert performance by the psychologist Anders Ericsson, the best way to master a field is to work on the task that’s most demanding for you personally. And often the best way to do this is alone. Only then, Mr. Ericsson told me, can you “go directly to the part that’s challenging to you. If you want to improve, you have to be the one who generates the move. Imagine a group class — you’re the one generating the move only a small percentage of the time.” 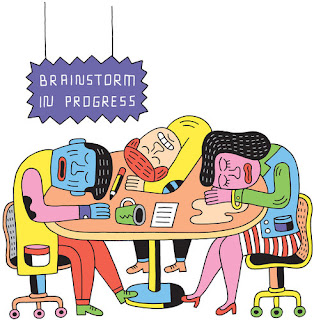 Conversely, brainstorming sessions are one of the worst possible ways to stimulate creativity. The brainchild of a charismatic advertising executive named Alex Osborn who believed that groups produced better ideas than individuals, workplace brainstorming sessions came into vogue in the 1950s. “The quantitative results of group brainstorming are beyond question,” Mr. Osborn wrote. “One group produced 45 suggestions for a home-appliance promotion, 56 ideas for a money-raising campaign, 124 ideas on how to sell more blankets.”

But decades of research show that individuals almost always perform better than groups in both quality and quantity, and group performance gets worse as group size increases. The “evidence from science suggests that business people must be insane to use brainstorming groups,” wrote the organizational psychologist Adrian Furnham. “If you have talented and motivated people, they should be encouraged to work alone when creativity or efficiency is the highest priority.”

The reasons brainstorming fails are instructive for other forms of group work, too. People in groups tend to sit back and let others do the work; they instinctively mimic others’ opinions and lose sight of their own; and, often succumb to peer pressure. The Emory University neuroscientist Gregory Berns found that when we take a stance different from the group’s, we activate the amygdala, a small organ in the brain associated with the fear of rejection. Professor Berns calls this “the pain of independence.”

The one important exception to this dismal record is electronic brainstorming, where large groups outperform individuals; and the larger the group the better. The protection of the screen mitigates many problems of group work. This is why the Internet has yielded such wondrous collective creations. Marcel Proust called reading a “miracle of communication in the midst of solitude,” and that’s what the Internet is, too. It’s a place where we can be alone together — and this is precisely what gives it power.

MY point is not that man is an island. Life is meaningless without love, trust and friendship.

And I’m not suggesting that we abolish teamwork. Indeed, recent studies suggest that influential academic work is increasingly conducted by teams rather than by individuals. (Although teams whose members collaborate remotely, from separate universities, appear to be the most influential of all.) The problems we face in science, economics and many other fields are more complex than ever before, and we’ll need to stand on one another’s shoulders if we can possibly hope to solve them.

But even if the problems are different, human nature remains the same. And most humans have two contradictory impulses: we love and need one another, yet we crave privacy and autonomy.

To harness the energy that fuels both these drives, we need to move beyond the New Groupthink and embrace a more nuanced approach to creativity and learning. Our offices should encourage casual, cafe-style interactions, but allow people to disappear into personalized, private spaces when they want to be alone. Our schools should teach children to work with others, but also to work on their own for sustained periods of time. And we must recognize that introverts like Steve Wozniak need extra quiet and privacy to do their best work.

Before Mr. Wozniak started Apple, he designed calculators at Hewlett-Packard, a job he loved partly because HP made it easy to chat with his colleagues. Every day at 10 a.m. and 2 p.m., management wheeled in doughnuts and coffee, and people could socialize and swap ideas. What distinguished these interactions was how low-key they were. For Mr. Wozniak, collaboration meant the ability to share a doughnut and a brainwave with his laid-back, poorly dressed colleagues — who minded not a whit when he disappeared into his cubicle to get the real work done.

Susan Cain is the author of the forthcoming book “Quiet: The Power of Introverts in a World That Can’t Stop Talking.”
----------
http://www.nytimes.com/2012/01/15/opinion/sunday/the-rise-of-the-new-groupthink.html?_r=1&pagewanted=all
Posted by pratanacoffeetalk at 1:18 PM