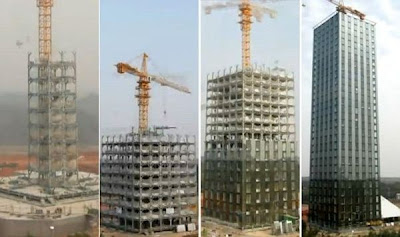 We’ve all heard the amazing and sometimes hair-raising stories about construction in China. This story just about takes the cake, but instead of some slapped-together monstrosity, we are looking at a 30-story hotel built to withstand a Magnitude 9 earthquake with purified air conditioning and, wait for it, erected from scratch in just over two weeks.

Built in Hunan Province, near Dongting Lake, by Broad Group, the structure is composed of pre-fabricated sections based on a diagonally braced steel structure. The company claims their building is five times more earthquake resistant, five times more energy efficient and their own design of 3-stage heat-recovery air conditioning creates air 20 times purer than the outside air.

Even more enthralling is the fact that the pop-up hotel is the second of the company’s demonstration projects and it is preparing to build a 200-storey, 600m steel building in Dubai which will accommodate 110,000 people.

The first project was the Ark Hotel in Changsha, which rose to 15 stories in just six days while using one sixth the material of a similar conventional structure and costing 20 per cent less. Broad famously built its pavilion in the Puxi side of the Shanghai Expo Garden within 24 hours to showcase its innovations in construction.

The Dubai project, if it goes ahead, can be factory-produced within four months, and the whole installation can be finished in two months, Zhang Yue, the group's president, said in a statement.
With a new skyscraper (building over 500ft/152m) built every five days in China, these new mass production methods will quite likely revolutionise the building industry in Asia and possible the world by reducing building costs by three to ten times.