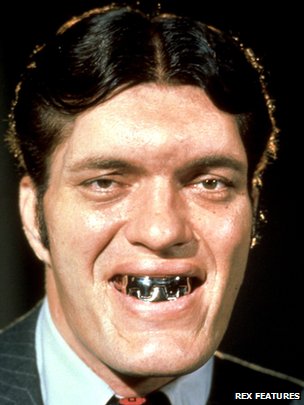 The towering American star, who appeared in The Spy Who Loved Me in 1977 and Moonraker in 1979, died in hospital in Fresno on Wednesday.

A spokeswoman for Saint Agnes Medical Center confirmed Kiel's death, but did not reveal the cause.

Kiel made his name as cable-chomping henchman Jaws opposite Roger Moore as 007.

Sir Roger said he was "totally distraught" at the death of his co-star.

"We were on a radio programme together just a week ago," said the former Bond star, adding "[I] can't take it in".

Kiel and Sir Roger were aguests on BBC's Radio 4 programme The Reunion, which aired on Sunday, along with Bond actress Britt Ekland, recalling their roles in the spy series.

During the programme, Kiel said he initially thought playing Jaws - a man who killed people with his teeth - could appear "over the top".

"I was very put off by the description of the character and I thought, well, they don't really need an actor, he's more a monster part," he said.

"So I tried to change that view of it... I said if I were to play the part, I want to give the character some human characteristics, like perseverance, frustration."


Sandro Monetti, director at Bafta in Los Angeles and a former showbiz reporter, described Kiel as having "teeth of steel, but a heart of gold".

He recalled seeing the actor at James Bond conventions: "It was like seeing kids meeting Santa Claus. Everyone has got such joyous memories of Jaws, and he had time for everybody."

Monetti added: "Whenever you mentioned Jaws, his eyes lit up and there was that famous grin."

Micky Dolenz, who starred with Kiel in the seminal episode of The Monkees - I was a Teenage Monster, tweeted his memories of the star: "The great character actor and gentle giant."

The character of Jaws in The Spy Who Loved Me was originally intended to die at the end of the movie, but he was so popular with fans that Kiel was brought back to reprise the role in Moonraker.

"The original script had me being killed by the shark," Kiel said.

"They filmed that and they also filmed an ending where I survive and pop out of the ocean.

"That was one of the big moments for me, watching the blue-collar screening of the movie, The Spy Who Loved Me, and having the reaction of the crowd at the theatre when Jaws popped out of the ocean, survived and swam away. There were hoots and howling, applause. I couldn't believe it."

Born in Detroit, Michigan, Kiel had the hormonal condition acromegaly, which was said to have contributed to his height.

His first break came in 1959 when he played the alien Kanamit in Twilight Zone.

He published an autobiography in 2002, called Making It Big In The Movies.

His many other acting roles included deadly assistant Voltaire in the 1960s TV series The Wild, Wild West; playing opposite William Shatner in the 1970s TV sitcom Barbary Coast; taking on the lead character of Eli Weaver in the movie The Giant of Thunder Mountain; and spoofing his most famous role as "Famous big guy with silver teeth" in the movie version of Inspector Gadget.

In recent years, he also spent much of his time touring the world and appearing at conventions to meet Bond fans.