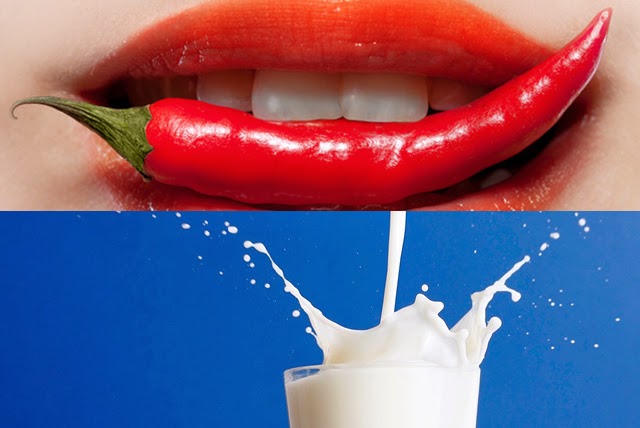 Whether it’s a few flakes on a pizza or the spiciest vindaloo known to humankind, most people can tolerate or even enjoy the tingling, burning sensation chilli can bring.


So how does chilli deliver its sting? And why is it that milk can take the edge off a spicy meal, while water doesn’t work as well?

Our senses of taste and smell are collectively known as the chemosenses; they detect certain chemicals in the environment.

Smell (olfaction) refers to the detection of volatile chemicals in the nasal cavity, whether they enter via the nostrils or via the throat. We don’t know why certain chemicals smell the way they do, so we can’t predict what a new chemical will smell like based on chemical structure. Whoever works that out is almost certainly in the running for a Nobel Prize.


But people often misuse the word “taste”. Wines are often described as tasting along the lines of “complex varietal flavours of cherries and blackberries, with a promise of herbs”.

Actually, the only taste you’re getting from the wine is some sweetness (sugars) and some sourness (acids). The cherries, blackcurrants and promised herbs are part of the flavour of the wine, which is the combination of the tastes and smells that enter the nasal cavity via the throat.

Our nose and mouth also pick up other sensations, such as pain or irritation, through chemical reactions. That tickle that you get with wasabi or Hot English Mustard is actually a pain reaction. The same is the case with chilli.

The active ingredient in chilli is capsaicin (pronounced kap-say-sin). Capsaicin irritates eyes, lungs and skin, so you need goggles, respirators and HAZMAT suits when dealing with the pure stuff.

It is also potentially lethal. Concentrations of 118.8mg/kg are lethal to 50% of mice (also known as the LD50 dose). And yet, the ability to eat very hot chillis is often seen as a badge of honour.

Bell peppers have a Scoville rating of 0. Tabasco sauce is around 2,500 Scovilles, while Jalapeños are somewhere around 3,500-10,000 depending on the Jalapeño. There is a sauce called Dave’s Insanity Sauce, which is (allegedly) the only sauce ever to be banned from the American National Fiery Foods Show (imagine the portaloos at that place). It has a Scoville rating of 180,000.

In January last year, British doctor Ian Rothwell became the first person to eat a curry with a Scoville rating of 6,000,000 (called “The Widower”). The chefs used goggles and facemasks during preparation.

After signing a disclaimer, Rothwell took an hour to eat the curry, including a trip outside for fresh air, during which he was said to be hallucinating, although he denies this. Unfortunately, chilli-induced hallucinations are not well understood. (I’d love to run some experiments on this, but think that ethics committees might have something to say about it.)

When a friend of mine turned 21, we went out for Indian. We ordered him a vindaloo, only to have him say “Pfft, that’s not hot enough” and send it back to the kitchen. We heard the cook yell “What? I’ll show him!” and ten minutes later, a waiter brought out the new and improved vindaloo.

My friend took a bite, started to sweat profusely and reached for any water he could find. Fortunately the waiter was ready for this and brought over a glass of milk, which immediately took the edge off. He collected a decent tip from my mate that night.

So why is milk, and not water, your go-to pain relief after a spicy curry?

Without getting too into the chemistry, capsaicin has a long hydrocarbon tail, meaning it binds strongly with lipoprotein receptors on the tongue.

Capsaicin doesn’t dissolve in water, so water won’t help much, but it does dissolve in alcohol and vegetable oils. Beer is not very alcoholic, so it won’t do much. Stronger drinks may help more, but there’s a limit to how much alcohol you can have.

The traditional cure is mammal’s milk. Milk contains casein, a fat-loving substance that essentially has a detergent effect on the capsaicin, just like soap has on grease. But it has to be mammal’s milk – coconut milk does not contain casein.

But some chillies are still ridiculously hot and milk can only help so much. If you do try The Widower, you’ll essentially need a fully-functional milking shed next to the table to get you through it. And you’ll still most likely want to prepare by putting your toilet paper in the freezer.