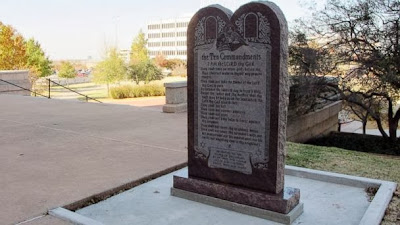 A monument to the Ten Commandments that sits outside the Oklahoma statehouse may soon have some unholy company.

Satan worshipers are seeking to build their own monument at the state Capitol, and Lucien Greaves, a spokesman for the Satanic Temple, said he’s “optimistic” it will be approved.

“I really don’t see a grounds which they can reject this,” he told ABC News.

The privately funded Ten Commandments monument was approved by the conservative-led Oklahoma state legislature in 2009, and erected on Capitol grounds in 2012. It has riled up opponents ever since, many calling into question the constitutionality of the monument.

But Greaves does not see a problem with the Christian monument, as long as it does not stand alone.

“I feel that the statue is only problematic when it stands alone,” Greaves said. “It would change the dynamic with our monument there. We aren’t objecting to the Ten Commandments monument, we’re objecting to the monument standing alone.”

When asked what the Satanic monument would look like, Greaves said he doesn’t want to “reveal too much about the possible design options,” but hinted that his “favorite design, at the moment, is an interactive display for children.”

The American Civil Liberties Union has been less accepting of the existing monument, and has filed a lawsuit seeking its removal.

“The monument’s placement at the Capitol has created a more divisive and hostile state for many Oklahomans,” Ryan Kiesel, executive director of ACLU Oklahoma, said in a statement. “When the government literally puts one faith on a pedestal, it sends a strong message to Oklahomans of other faiths that they are less than equal.”

But Greaves said he believes a monument from the Satanic Temple would re-assert that “we all have a voice” in this “religiously pluralistic nation.”

Ritze could not comment because of the impending ACLU lawsuit.

Though this would be the first monument of its kind for the Satanic Temple, the group has been active in the past to push public displays of religion.
The temple held its first major rally in February to support Florida Gov. Rick Scott’s signing of a bill allowing the possibility of student-led prayer in the state’s public schools.

“The Satanic Temple embraces the free expression of religion, and Satanists are happy to show their support of Rick Scott who … has re-affirmed our American freedom to practice our faith openly, allowing our Satanic children the freedom to pray in school,” the Temple said in a February statement announcing the rally.