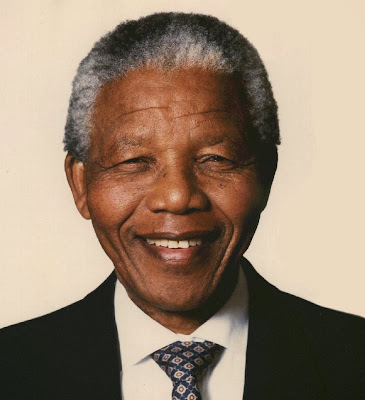 Mr Mandela, 95, led South Africa's transition from white-minority rule in the 1990s, after 27 years in prison.

He had been receiving intense home-based medical care for a lung infection after three months in hospital.

In a statement on South African national TV, Jacob Zuma said Mr Mandela had "departed" and was at peace.

"Our nation has lost its greatest son," Mr Zuma said.

He said Mr Mandela would receive a full state funeral, and flags would be flown at half-mast.

BBC correspondents say Mr Mandela's body will be moved to a mortuary in Pretoria, and the funeral is likely to take place next Saturday.

A crowd has gathered outside the house where Mr Mandela died. Some are flying South African flags and wearing the shirts of the governing African National Congress, which Mr Mandela once led.

The Nobel Peace Prize laureate was one of the world's most revered statesmen after preaching reconciliation despite being imprisoned for 27 years.

He had rarely been seen in public since officially retiring in 2004. He made his last public appearance in 2010, at the football World Cup in South Africa.

His fellow campaigner against apartheid, Archbishop Desmond Tutu said he was not only an amazing gift to humankind, he made South Africans and Africans feel good about being who we are. He made us walk tall. God be praised."

"What made Nelson Mandela great was precisely what made him human. We saw in him what we seek in ourselves," Mr Zuma said.

"Fellow South Africans, Nelson Mandela brought us together and it is together that we will bid him farewell."

Tributes have come in from around the world.

US President Barack Obama said Mr Mandela achieved more than could be expected of any man.

"He no longer belongs to us - he belongs to the ages," Mr Obama said, saying Mr Mandela "took history in his hands and bent the arc of the moral universe towards justice".

Mr Obama, the first black president of the United States, said he was one of the millions who drew inspiration from Mr Mandela's life.

FW de Klerk, who as South Africa's last white president ordered Mr Mandela's release, called him a "unifier" and said he had "a remarkable lack of bitterness".

He told the BBC: "I think his greatest legacy... is that we are basically at peace with each other notwithstanding our great diversity, that we will be taking hands once again now around his death and around our common sadness and mourning."

He was moved to his home in the Houghton suburb of Johannesburg in September, where he continued to receive intensive care.

Born in 1918, Nelson Mandela joined the African National Congress (ANC) in 1943, as a law student.

He and other ANC leaders campaigned against apartheid. Initially he campaigned peacefully but in the 1960s the ANC began to advocate violence, and Mr Mandela was made the commander of its armed wing.

He was arrested for sabotage and sentenced to life imprisonment in 1964, serving most of his sentence on Robben Island.

It was forbidden to quote him or publish his photo, but he and other ANC leaders were able to smuggle out messages of guidance to the anti-apartheid movement.

He was released in 1990 as South Africa began to move away from strict racial segregation - a process completed by the first multi-racial elections in 1994.

Mr Mandela, who had been awarded the Nobel Prize in 1993 jointly with Mr de Klerk, was elected South Africa's first black president. He served a single term, stepping down in 1999.

After leaving office, he became South Africa's highest-profile ambassador, campaigning against HIV/Aids and helping to secure his country's right to host the 2010 football World Cup.

He was also involved in peace negotiations in the Democratic Republic of Congo, Burundi and other countries in Africa and elsewhere.