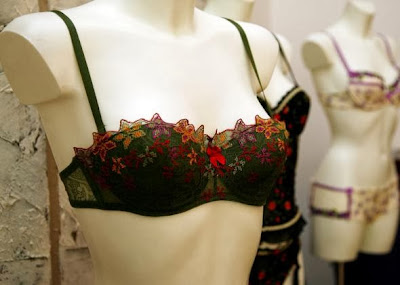 My sisters, something wondrous has happened. Researchers at Microsoft are developing a smart bra that alerts women to their stress levels, so that they might avoid “emotional overeating.”

According to the BBC, the blueprint “contains removable sensors that monitor heart and skin activity to provide an indication of mood.” The bra takes your EKG and feeds it to an app on your phone, which then counsels you to avoid the refrigerator, because you’re stressed, or to go ahead and cross the kitchen threshold. (You’re calm! You can handle it.) What a sign of progress that technology now recognizes the holy trinity of womanhood, emotional instability, and concern for food and weight. These researchers totally “get” us! (Please let the bra be pink.)

My one tiny concern is that I am not actually sure I need my underwear to tell me when I’m anxious—I JUST KNOW, OK?—in the same way that I don’t need my breasts to notify me when it is already raining. On the other hand, sometimes you think you know what you’re feeling but you really just need your bra to brasplain it to you, otherwise you will eat all the things.

My working theory of the smart bra is that it was in fact designed by Bryan Goldberg, the same eminence who brought us Bustle, the website for women. (“I may not understand the difference between eyeliner, mascara, and concealer, but I do understand that women have boobs. And feelings” is something you could imagine the founder of Bustle saying.) Until I can prove it, though, let's hear from the computer scientists at the University of Rochester in New York and the University of Southampton in the U.K. who describe exactly how the product they are developing might work in a paper released this year:


Sally has been home from work for a few hours, and she finds herself rather bored. An application on Sally’s mobile phone has also detected that she is bored by reading her physiological state through wearable sensors. Since this mobile application has previously learned that Sally is most susceptible to eating when she is bored, the application provides an intervention to distract Sally and hopefully prevent her from eating at that moment.

What kind of distracting intervention? The paper doesn’t say, but I hope it is flashing lights and a deep voice shouting, “Sally, this is your bra talking! Stay away from the cheese curls!” Emotional overeating may be a real problem (for both genders), but it’s hard to imagine any phone message in this context not shaming the woman it’s meant to "protect"—and we all know how effective shame is as a catalyst for weight loss.

Yet maybe Sally won’t feel ashamed because her breasts look so great in her new bra! Maybe the device will also sign her up for gym memberships and interpret her dreams. Maybe Sally and her smart bra will have fabulous adventures—Sally recharging the bra every three to four hours, the faithful bra supporting Sally, tending to her stress, and all the while keeping her dark, fridge-raiding secrets tightly under wraps. At least until it learns to tweet.
----------------------
http://www.slate.com/blogs/xx_factor/2013/12/06/microsoft_smart_bra_will_manage_women_s_stress_to_prevent_emotional_overeating.html?google_editors_picks=true
Posted by pratanacoffeetalk at 8:20 AM