BLACK LOTUS, MAGIC THE GATHERING'S MOST FAMOUS CARD, SELLS FOR $ 27,302 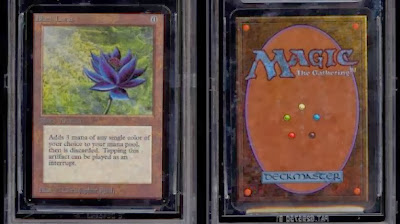 Even though you’re not in middle school anymore and may not have even seen a Magic the Gathering card in years, the game is as big as it has ever been. In fact, thanks to a plethora of trading and collectible card games on iOS and Android, Blizzard’s Hearthstone, and Mojang’s Scrolls, the trading card game genre is experiencing one of its most successful runs. Though Pokémon and Yu-Gi-Oh! are stable, Magic is the king of the crop, which is why its most famous card, the Black Lotus, just sold on eBay for $27,302.

The card is from Magic’s first set, Alpha, and received what the seller calls the highest ever graded 9.5 from Beckett Grading Services (BGS). The Black Lotus is part of MtG’s Power Nine, a set of nine cards printed during the early history of the game, and are considered to be the most powerful. The most valuable Black Lotus cards ever printed came from both the Alpha and Beta sets, with the Alpha cards being worth more due to its much more limited print, which is estimated to be only 1,100 copies. The Beta version of the card had around 3,300 copies printed.

Though the Black Lotus is the most famous card, another Power Nine compatriot is the most controversial (or funny, depending on how seriously you take MtG). Called Time Walk, the card’s original text simply read “Target player loses next turn,” with the intent of giving the person that plays the card two turns in a row — a ridiculously advantageous situation to begin with. However, a playtester pointed out to Richard Garfield, creator of MtG, that the original wording of the card was a bit ambiguous. “Target player loses next turn” could easily mean that on the target player’s next turn, they lose, as in the game. The Black Lotus, on the other hand, gives a player three mana of any color and costs nothing to play, so it provides an enormous boost during the earlier stages of the game.