STRUCK BY LIGHTNING TWICE AND .... SURVIVE 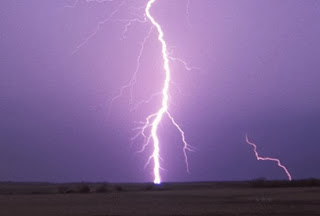 The odds of being struck by lightning in a lifetime are about 1 in 6,250, according to the National Weather Service. By being struck twice, 31-year-old Casey Wagner beat far greater odds.

The man, who was at an off-road competition in North Texas over the weekend, was standing under a tree when he was hit by lightning twice in close succession, he told KTVT-TV.
“What I remember is just a loud boom and it dropped me to my knees and then it hit me again,” Wagner told the station. “When I got hit, it was just two big ol’ flashes and then sparks went everywhere.”

A nurse at the event took care of him until he was taken to a hospital, where doctors monitored him until his heartbeat returned to normal. The plastic poncho he was wearing may have attracted the lightning, hospital personnel told him.

He doesn’t seem to have any permanent injuries, although he temporarily lost feeling in his lower right leg and part of his left arm.

“It just feels like my whole body is waking up from … like if your arm falls asleep, that’s how my whole body feels,” he said. That feeling could last a week, doctors told him. Longer-term problems range from dizziness and headaches to problems with sleeping and reaction times, according to the National Weather Service.

Wagner says he owes his life to God.