A TALE OF A CROW 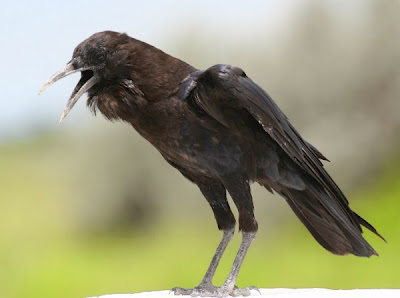 Once there was a crow. It had a burning desire of looking to be more beautiful. The crow lived in a big Banyan tree, where a number of peacocks also lived.

It saw the beautiful plumes of the peacocks and cherished a desire to look like one of them. It often cursed itself for being ugly. It scorned the whole crow community being black and ugly. It had an ambition to improve like a peacock so that the people may praise it.

In order to fulfil its ambition, it thought of a plan. It decided to collect dropped off feathers of the peacocks and fix them up into its own, so that it may look beautiful like peacock.

After putting on the feathers of the peacock, the crow considered itself to be a peacock. It was full joy. It decided to go and live with the peacocks. It took a long flight and reached the place where some peacocks were walking around. It walked up and down among the peacocks.

The peacocks saw this strange bird with surprise. It looked half crow and half peacock. The peacocks are known for their self-pride. They could not tolerate a crow posing to be a peacock. At once they pounced upon the crow and broke away some of its artificial feathers.

The crow was able to save its life with great difficulty. It flew at full speed for its life to a place where some crows were perching.

It began to move about proudly among the crows. The crows took it to be a different bird, resembling a peacock. They could not brook the presence of a peacock among themselves; they attacked it, pecking it hard with their beaks. Again the crow had to fly away for its life.

It was pained at heart and flew to a lonely tree in the jungle. It did not know what to do. It though, it had tried to improve itself by fixing peacocks’ feathers into its own, but they could not make it peacock. It was not accommodated by the peacocks rather it was attacked for being a imposter. Not only this, even its own brethren- the crows disowned it. It was at a loss to know what to do now. At last it tore off all of its peacock feathers and became a crow again.

It was only then that the crows owned it as one of them and accommodated it among themselves.

The foolish crow had a bitter experience. It learnt a lesson for life. Do not adopt unnatural and unfair methods for self-improvement and do not try to copy out others.

Moral of this story

It teaches us an important lesson that we should not try to improve ourselves only by imitating others “Barrowed garments seldom fit well!” We must do everything on our own and should not copy others. Improvement made through hard work and sincere efforts is long lasting and useful, but an attempt for improvement made through copying or through wrong methods proves to be disastrous. Such improvement does not bring in the desired benefit. You must try to progress and rise high by putting in sincere efforts and hard work. The earnest efforts made in attaining something bear fruit. The attainment gained through hard work is real and long lasting.

Introspection is not something very difficult. You have simply to peep inside and analyze impartially, which actions are right or wrong. Which are your abilities and which are your short-comings. You have to be earnest, impartial and just in making a correct assessment of yourself. Once you are able to identify your capabilities and weaknesses, you can work wonders in improving yourself by making proper use of your capabilities.
------------------
http://www.thelivingtreasure.org/forum/forum/forum_posts.asp?TID=1681&OB=DESC&PN=2&title=short-inspiratiOnal-and-motivatiOnal-stories
http://upload.wikimedia.org/wikipedia/commons/d/df/Cape_crow.jpg
Posted by pratanacoffeetalk at 7:29 AM