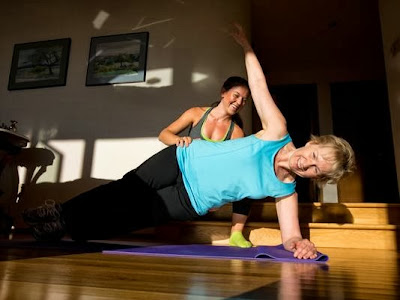 Genes play a role in breast cancer risk for some; lifestyle changes cut risk for many.

Breast cancer can be a devastating disease, but most women can take active steps to reduce their risk, say some of the nation's leading breast cancer experts.

Women shouldn't blame themselves for their illness, doctors say, noting that it's usually impossible to pinpoint what caused an individual woman's breast tumor.

But about 25% of all breast cancer cases in women of all ages could be avoided by maintaining a healthy body weight and doing regular physical activity, says internist Anne McTiernan, a researcher with the Fred Hutchinson Cancer Research Center in Seattle.

"The greatest benefits for breast cancer reduction come from weight control and physical activity together," she says.

Alpa Patel, an American Cancer Society epidemiologist, agrees that these are "modifiable risk factors," along with limiting alcohol consumption.

It may seem obvious, but being a woman is the main risk factor for developing breast cancer, the cancer society says. Men may also develop it, but the disease is about 100 times more common among women than men. This is likely because men have less of the female hormones estrogen and progesterone, which can promote breast cancer cell growth, the group says.

A woman's risk of developing breast cancer increases as she gets older. About one in eight U.S. women (12%) will develop invasive breast cancer during their lifetime, the cancer society says.

A large part of breast cancer risk is determined by women's lifetime exposure to estrogen, Patel says. Your risk increases if you begin your period early, if you go through menopause late, if you have fewer children or if you have them later in life. Those are considered non-modifiable risk factors, she says.

About 5% to 10% of breast cancer cases are thought to be hereditary, resulting directly from gene defects, called mutations, inherited from a parent, the cancer society says.

A small percentage of women, including Angelina Jolie, "have genes that put them at a very high lifetime risk," Patel says. Jolie opted for a preventative double mastectomy after learning that she carried a mutation in a gene called BRCA1, which gave her an 87% chance of breast cancer.

The most common cause of hereditary breast cancer is an inherited mutation in the BRCA1 and BRCA2 genes, the cancer society says. Women with those genes need to be thinking of more intensive ways of reducing their risk, McTiernan says. "They need to be talking to a specialist."

But breast cancer that isn't linked to genes appears to be connected to lifestyle and environment, she says. Her studies show that weight loss and exercising regularly combined have the most impact on improving the biomarkers, including estrogen and insulin, for breast cancer risk.

Between two-thirds and three-quarters of breast cancers occur after menopause, and obesity is most clearly linked to postmenopausal breast cancer. That's partly because body fat raises levels of estrogen, which fuels most breast cancers. "If a woman is overweight or obese, she most likely is making a lot of estrogen," McTiernan says. "If a woman doesn't have lot of fat tissue, chances are her estrogen is low."

With weight loss, you don't have to go from being a heavy person to being very slim, McTiernan says. "We're not talking about becoming a model. We're talking about getting off 5% to 10% of your weight, preferably 10%. So if a woman weighs 200 pounds and loses 20 pounds, it will make a huge difference in her risk for breast cancer."

Another hormone that comes into play for breast cancer is insulin. Insulin helps glucose (sugar) get into cells, where it is used for energy.

"You need insulin for life, but too much is bad for you," McTiernan says. People who are obese tend to make too much insulin. It's not made by the fat tissue, but the fat tissue causes it to increase, she says.

Heavy people tend to develop "insulin resistance, a condition where the body can't use the insulin you have, so you keep making more and more, and the excess insulin is associated with increased breast cancer risk," she says. "Weight control helps keep insulin at the right level."

Patel adds that, "while not as well-established as the estrogen pathways, there is increasing evidence that insulin pathways may also be involved in breast cancer risk."

She says the verdict is still out on whether weight loss alone reduces risk, partly because many women regain the lost pounds. Researchers are currently studying how much weight loss is needed and how long you have to keep the weight off to lower breast cancer risk, Patel says.

In the meantime, Patel encourages people to sit less and move more. Even if you are doing half an hour of aerobic activity a day, you need to make sure you don't sit the rest of the day, she says. "You have to get up and take breaks from sitting."

IT DOESN'T TAKE MUCH

So how much should you exercise? McTiernan did an analysis of data from the Women's Health Initiative, which showed that as little as 1.25 to 2.5 hours per week of brisk walking reduced a woman's risk by 18%. Walking 10 hours a week reduced the risk a little more.

McTiernan says physical activity decreases the risk of breast cancer for all women, so she advises that they move as much as they can, not only with planned physical activity but by working exercise into their lives — taking the stairs, walking more, gardening, cleaning the house. "It's never too late to make lifestyle changes to reduce your risk for breast cancer."

What about if you have already had breast cancer? What should you do then?

Breast cancer survivors who are physically active live longer than those who aren't physically active, says Catherine Alfano, deputy director of the Office of Cancer Survivorship at the National Cancer Institute. And studies show that patients who exercise after treatment report having less pain and fatigue and improved quality of life and daily functioning, which is the ability to participate fully in things such as work and caring for children and aging parents, she says.

The American College of Sports Medicine recommends that — to the extent they are able — cancer patients and survivors should adhere to the government's exercise guidelines, which recommend at least 150 minutes a week of moderate-intensity aerobic activity such as brisk walking.

There are more than 2.9 million breast cancer survivors in the USA, the American Cancer Society says. Most breast cancer survivors are overweight or obese, and most of them are physically inactive, Alfano says. Plus, women tend to become less active and gain weight over the course of chemotherapy and radiation treatment for breast cancer, and that compounds their problems, she says.

"We know that excess body weight is associated with increased risk of recurrence, second cancers and decreased length of survival. However, we need to conduct further research studies to prove it's causal. We also know that excess body weight and physical inactivity are related to having a worse time with cancer symptoms during and after treatment."

So physical activity improves symptoms and may increase longevity, but does weight loss help in the same way?

The potential benefits of weight loss are less clear than those of physical activity because there have been very few studies of intentional weight loss in cancer survivors, Alfano says. "We need more trials to see if weight loss improves survival."

In the meantime, she says, "many breast cancer survivors are looking for a way to take the reins of control back and be in charge of their health again. Exercise and maintaining a healthy body weight are the best ways to do that."