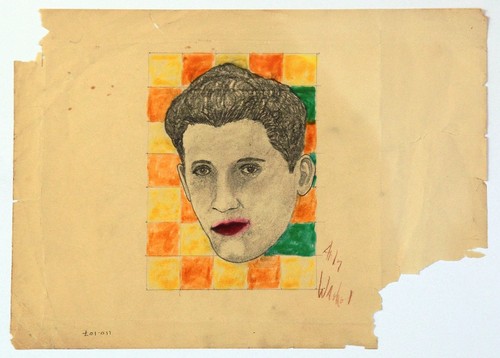 It's one of those stories that makes you want to run to your nearest rummage or garage sale and find that one-in-a-million long-lost art work to buy cheap and sell for millions.

A 49-year-old man found an unimpressive sketch portrait in 2010 at an estate sale in Las Vegas.

The sketch was not particularly impressive or noteworthy, but for the signature in the bottom right corner that reads "Andy Warhol."

Andy Fields, 49, known on Ebay as @sophias_daddy:
It was bought by myself at an estate sale in Las Vegas in 2010 together with some other pictures. Last year it was hanging for a few months in the Royal West of England Academy in Bristol and they framed it to a highly professional standard with a quality frame and museum grade glass to ensure preservation whilst being exhibited. Naturally, this will be sold with the piece.

Previously to that it was studied by the Andy Warhol Authentication Board who wrote their unique number in the lower left corner. They sent it back to me saying they did not have enough evidence to support the fact it could be real. Please note that when they have the slightest doubt about a piece, they simply stamp 'denied' on it in red letters. This was not the case with this picture. Since submitting it to the Authentication Board I have done extensive research to prove beyond all reasonable doubt that it is genuine. I am just sad that the Board is no longer authenticating works of Warhol.

Many people believe this to be the earliest known pop art piece that Andy Warhol ever created.

The picture has been appraised by an independent art appraiser at a starting value of $2,100,000. The full appraisal report can be sent upon request to serious potential buyers.

The HuffPo points out the difficulty in validating the artwork:
The drawing was never validated by the Warhol Authentication Board, the now defunct committee that formerly provided potential Warhol works with a stamp of approval. Since the board was unable to gather enough evidence on the Vallee work before it shut its doors, Fields has been left in art limbo, attempting to convince professionals that the sketch is the real thing.
As of Tuesday morning (8/06) at 8am, there's 1 day 19 hours until the sale closes, or August 7th just before midnight.

If you buy this sketch for near $2M, you'll be glad to know that shipping is free.