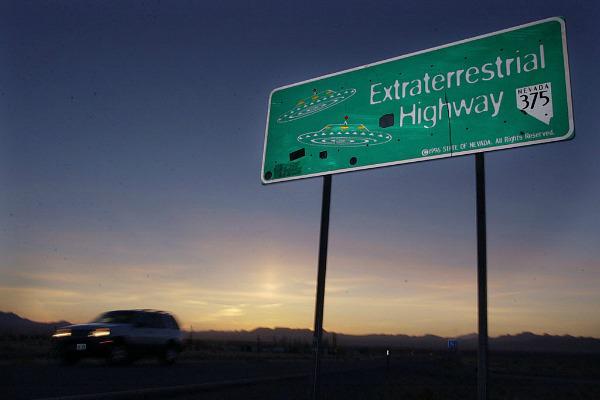 A moonscape corner of Nevada known as Area 51 became synonymous with cold-war spy craft and intrigue – home to Project Aquatone and Operation Baby Face – but also gave rise to a whole body of UFO literature after a durable seed was planted in the American imagination: Could the truth about whether we’re alone in the universe be “out there”?

The National Security Archives on Thursday released a blockbuster CIA history that for the first time officially acknowledges the existence of “the facility at Groom Lake.”

The CIA, of course, managed to redact enough paragraphs to keep the debate about the facility’s role alive for a subculture of alien and UFO believers who say the site has been used by the government for everything from achieving the means of weather control to reverse-engineering spacecraft.

But the report, "The Central Intelligence Agency and Overhead Reconnaissance: The U-2 and OXCART Programs, 1954-1974," also gives new details about what the government was really doing out there – developing new breeds of military aircraft, many of them unusual looking and unmanned – the secrecy around which fueled conspiracy theories that, in some cases, helped mask what the Americans were really plotting in the deep desert.

Established in the mid-1950s as a test site for a new breed of highflying bombers and spy planes – including the S-71 Blackbird and U-2 reconnaissance aircraft – Area 51, known among spooks as “Paradise Ranch,” became headquarters for risky games of cold-war intrigue as the Americans surveilled its enemies and rivals from more than 60,000 feet, establishing an unreachable and implicit threat from the high skies. Shootdowns and crashes of the new birds led to some of the most anxious moments of the cold war.

The secrecy around the facility and the daily test flights, the new report does acknowledge, led to an “unexpected side effect,” including “a tremendous increase in reports of unidentified flying objects.”

The area became notorious in America’s cultural mythology in 1989, as the cold war wrapped up, when a Las Vegas man who claimed to have worked at the facility told a fantastical tale about witnessing crashed alien space hardware.

A country hungry for government conspiracy theories ate it up, as it spawned hundreds of books and inspired TV and film entertainment like the "X-Files," "Independence Day," and even inspired part of the "Indiana Jones" franchise, which features a “Hangar 51” that stores the Ark of the Covenant alongside alien mummies.

The British historian Chris Pocock, who has written exhaustive histories of the CIA’s spy plane program, said in a post on Thursday that the report actually contains little that has not already been published, and that some of the remaining redactions were anticipated. Though, referring to a section about U-2 deployment to Norway, he writes, “Three or more paragraphs are still redacted. Why?”

The CIA acknowledgment of Area 51 caused a buzz among UFO enthusiasts, many of whom were hardly put off by its revelations that highflying U-2s accounted for half of all UFO sightings in the 1950s and '60s.

Stanton Friedman, a Canadian “Ufologist,” told The Associated Press that such explanations are “utter rot and baloney.”

“Can the U-2 sit still in the sky? Make right-angle turns in the middle of the sky? Take off from nothing? The U-2 can’t do any of those things,” Mr. Friedman said.

But the new report does reveal data about vehicles tested at Area 51 that may have been able to conduct such aerial feats. The CIA history confirms that operatives at Area 51 were working on something called Project Axillary, which included an unmanned “miniature multi-purpose airborne vehicle,” a potential forerunner to America’s drone fleet currently buzzing around the world.

It also publicly acknowledges for the first time Project Aquiline, which Mr. Pocock, the historian, discussed in a 2011 article for Aviation International News.

“News that the U.S. has been operating mini-UAVs disguised to look like large birds along the border between Afghanistan and Pakistan reminded me of the time that I discovered Project Aquiline,” he writes. “This was a scheme devised by the CIA in the early 1970s to fly a reconnaissance UAV over key intelligence targets, such as ICBM sites and nuclear test grounds in the Soviet Union and China, without detection. The project was cancelled before deployment and has never been declassified.”