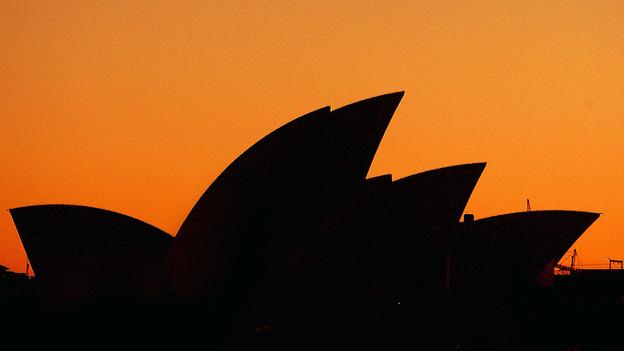 A groundbreaking vision and a controversial construction colour the fascinating history of one of the world’s most iconic buildings, writes Jonathan Glancey.

“It stands by itself as one of the indisputable masterpieces of human creativity, not only in the 20th Century but in the history of humankind.” With this ringing endorsement from Unesco in 2007, the Sydney Opera House was declared a World Heritage Site. The famous building, with its soaring, sail-like roofs, that is often said to define the city, country and continent, was promoted to join ranks with the Egyptian pyramids, the Great Wall of China and the cathedrals of Chartres and Durham.

This must have been a deeply moving moment for Jorn Utzon (1918-2008), the brilliant and poetic architect of the Sydney Opera House. From now on, there could be no doubting the supremely special qualities of this astonishing yet once hugely controversial building, opened by Queen Elizabeth II in 1973.

Today, few of the 1.2 million people who buy tickets for performances each year, and many fewer perhaps of the seven million who come to Sydney’s Bennelong Point from around the world to gawp at this architectural marvel, would ever think that its visionary architect was once treated like a pariah by the government that commissioned the building. The story is as dismal, and as necessary to recall, as the opera house is glorious.

It had all begun happily enough when, in 1957, Utzon’s proposal was chosen from the 233 entries in an international competition held by the government of New South Wales for the design of an opera house on the site of a tram depot fronting Sydney Harbour. The judges kept returning to the young Danish architect’s thrilling drawings even after they had discarded them several times in favour of more obviously practical designs. Intuition won the day. “We are convinced”, said the judges at last, “that they [Utzon’s drawings] present a concept of an Opera House which is capable of becoming one of the great buildings of the world.”

Construction began in 1957 with the driving of 588 concrete piles into land in and around Sydney Harbour to support the huge new building. But, as delays increased and costs began to spiral, a new coalition conservative government voted into office in 1965, took Utzon to task. Like Gaudi – the architect of Barcelona’s Sagrada Familia – before him, Utzon believed that the design of a building on this scale should evolve over time. Davis Hughes, the new minister of public works, representing a government that was not exactly culturally aware, demanded instant solutions including a full set of working drawings of the interiors to speed construction along. 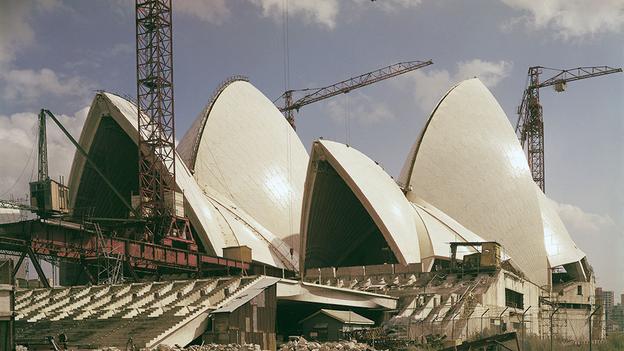 Hughes refused to pay Utzon’s fees, leaving the architect unable to pay his staff. He resigned, leaving Australia for good in 1966. As a result, some of the interiors failed to live up to the building’s sensational profile. A thousand Australian architects took to the streets denouncing Hughes. The minister’s bully-boy behaviour did little to speed up construction. By the time of its opening, the Opera House was ten years late and fourteen times over budget. But, while those politicians, who refused to allow the architect’s name to be mentioned at the opening ceremony, became smudged footnotes in Australia’s history, Utzon was to be lionized.

Invited by the Sydney Opera House Trust at the end of the century to improve the building’s foyers, among other works, Utzon provided spirited new designs for his masterpiece from his home high above the sea in Mallorca. In 2009, a year after his death, a state memorial and reconciliation service was held for the architect Australia had once reviled in the concert hall of the Sydney Opera House.

Up on the roof

Utzon’s breathtaking building looks better today than ever. I have been lucky enough to negotiate its wondrous roof, over that tempestuous sea of cream and white Swedish tiles adorning the ribbed concrete roof shells, each of which is a geometric and engineering wonder. Engineers - among them Ronald Jenkins, Jack Zunz and Peter Rice of Ove Arup and Partners - had made this roof possible: it took them three years to puzzle out, with the help of an early 3-D computer program written by Rice,and a further seven years to construct. 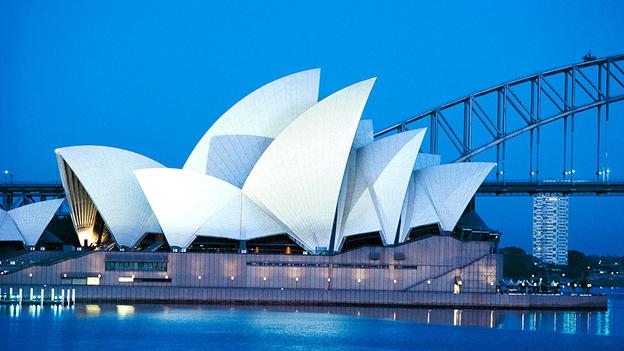 Beneath the world’s most memorable roof, visitors will find six performance venues seating a total of 5,738 people lined in white birch plywood and brush box glulam, and outside, a great public square, a fine restaurant under a smaller set of sail-like roofs, and, of course, one of the most compelling views any city in the world has to offer.

“Utzon made a building well ahead of its time”, said Frank Gehry, architect of the titanium-clad Guggenheim Museum on the waterfront at Bilbao, when in 2003 the Danish architect was awarded the prestigious Pritzker Prize. It was a building “far ahead of available technology . . . a building that changed the image of an entire country.” And, very much for the better.