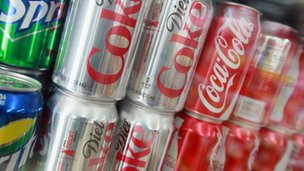 Fizzy drinks, cakes, biscuits, crisps and desserts may increase the risk of bowel cancer, according to a new study.

They reported links with some established risk factors of colorectal cancer - such as family history of cancer, physical activity and smoking.

The study, which used data from the Scottish Colorectal Cancer Study, was said to be first of its kind to find a positive link between bowel cancer and a diet high in sugary and fatty foods.

Researchers at Aberdeen and Edinburgh universities looked at the diets of 2,000 bowel cancer patients and compared them to the food and drink intake of a similar-sized healthy population.

They examined more than 170 foods, including fruit, vegetables, fish and meat, as well as high-energy snack foods such as chocolates, nuts and crisps and fruit drinks including fruit squash.

The study builds on previous research into the link between bowel cancer and diet.

Those studies identified two distinct eating patterns. One was high in fruit, vegetables and other healthy foods and the other - known as the western pattern - was high in meat, fat and sugar.

Dr Evropi Theodoratou, of the University of Edinburgh's School of Molecular, Genetic and Population Health Sciences, said: "What we have found is very interesting and it merits further investigation using large population studies.

"While the positive associations between a diet high in sugar and fat and colorectal cancer do not automatically imply 'cause and effect', it is important to take on board what we've found - especially as people in industrialised countries are consuming more of these foods."

The study, which was published in the European Journal of Cancer Prevention, was funded by the Medical Research Council, the Chief Scientist Office and Cancer Research UK.

Bowel cancer is the second most common cause of cancer death in the UK after lung cancer.