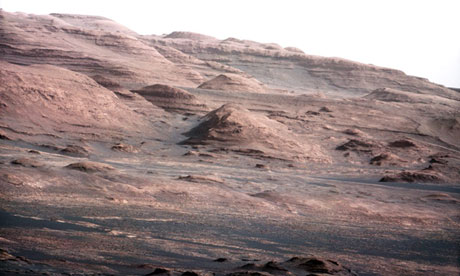 A mysterious, catastrophic event tore away the atmosphere of Mars, according to the first detailed analysis of the make-up of the air on the Red Planet.

A year after the Curiosity rover landed on Mars, and having travelled a kilometre over the Martian surface, its SAM (Sample Analysis at Mars) instruments have returned their first measurements, confirming the identity of the gases in the Martian atmosphere, which include argon, nitrogen, oxygen, carbon monoxide and carbon dioxide.

The mixture, revealed in two parallel studies published in the journal Science, closely matches that measured by the Viking lander in 1976, but, importantly, the new results are more reliable.

"Our Curiosity measurements are – for the first time – accurate enough to make direct comparisons with measurements done on Earth on meteorites using sophisticated large instrumentation that gives high-accuracy results," said Dr Chris Webster at Nasa's Jet Propulsion Laboratory in Pasadena, the lead author on one of the studies.

Previous attempts to measure the composition of the Martian atmosphere in-situ were made by both the Viking and Phoenix landers. However, the results did not agree, and there were large uncertainties on the Viking results.

Monica Grady, professor of planetary sciences at The Open University, who was not involved in the studies, was excited by the new results: "It's really great that two separate studies using different instruments and techniques have given the same composition. These findings reverse the results from the Phoenix mission and clear up some confusion over the composition of the Martian atmosphere."

The team believe that a catastrophic event must have torn the atmosphere apart 4bn years ago. The clues to this come in the ratio of two forms of the gas argon (one a primitive form, the other created more recently by radioactive decay) which is very different from that on Earth, suggesting that a major upheaval changed their relative amounts. Grady suggests that this could have been due to volcanic eruptions, or a massive collision that stripped the atmosphere away.

The results also show that reservoirs of carbon dioxide and water were established after this catastrophic event, and have remained little changed since.

"As Mars became a planet and its magma ocean solidified, catastrophic outgassing occurred while volatiles were delivered by impact of comets and other smaller bodies," said Dr Webster. "Solar wind, and the possible impact by a Pluto-sized body is thought to have stripped much of the initial early atmosphere from the planet, and since then the atmosphere has developed as a balance between volcanic injection and loss to space."

The new results from Curiosity will allow scientists to model the evolution of the Martian climate over time, and deduce whether the planet was warm and wet and if it might have had the right conditions for life.

"A fundamental question regarding the habitability of early Mars is how long liquid water, in the form of lakes, or even oceans, might have persisted on the surface to support microbial life that may have been present," said Dr Paul Mahaffy, at Nasa's Goddard Space Flight Centre and lead author on the parallel paper.

"From a practical standpoint we need to know the composition [of the atmosphere] today, and how it is changing, so that we can prepare for the eventual arrival of human explorers to the red planet," he added.

Having an accurate measurement of the Martian atmosphere also clears up some confusion over the origin of a group of meteorites on Earth, that were assumed to have originated from Mars based on measurements of trapped gases within them, but their identity could not be confirmed without the hard data provided by these results.

Dr Mahaffy said: "Our argon isotope measurements are very close to the meteorite values, which strengthens the case that these rocks came from Mars."