COCA COLA NEW BOTTLE IS A FROZEN WATER .... ONLY IN COLUMBIA (video) 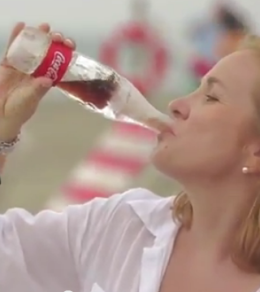 This icy new drinking vessel is shaped like the traditional glass Coke bottle and has the company’s name etched into the ice, according to Coca Cola’s website. Alas, right now you can only find it in Colombia, and there’s no word yet if Coke will introduce it in any other countries. But apparently it’s pretty popular so far — according to the site, beachside vendors have sold an average of 265 bottles per hour.

If you’re at least a marginally curious person, then perhaps you’re wondering how this works. Basically, these bottles are made of silicone molds filled with micro-filtered water, frozen to -13° F. Once you’ve drunk all the Coke, the bottle melts away. Oh, and each bottles come equipped with a rubber red band to make it easier to hold the vessel. The band then  doubles as a bracelet. Bonus!

Coke is touting the environmentally friendly nature of these melt-away bottles, but as ABC News points out, they require so much extra refrigeration that it basically cancels out the eco-friendly aspect.