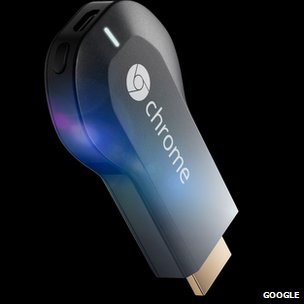 The dongle is plugged into a television's HDMI port, and allows users to stream media from smartphones, tablets and computers.

Launching immediately in the US, the device will cost $35 (£23). There is as yet no word on international launches.

Google also announced an upgraded Nexus 7 tablet, the first to run the new version of the Android system.

Chromecast is Google's latest attempt to gain ground in the television industry.

In 2012, Google faltered in its attempts to make a move into the living room, considered by many experts to be ripe ground for making large profits through advertising.

Google's partnership with Sony, with which it released a £200 set-top box, was poorly received.

That attempt followed an even earlier false start in 2010 when it launched Google TV, a service that was blocked by several TV networks, and suffered greatly from requiring consumers to buy expensive hardware.

With Chromecast, Google is attempting to simplify its large-screen offering, focusing on streaming clips from services such as YouTube and Netflix via a far cheaper device.

The dongle plugs into a television's HDMI port, and uses wireless home internet to link to devices.

However, unlike other similar devices, such as Apple TV, the media is streamed from the cloud, rather than from the mobile device itself.

This, Google said, allowed for higher-quality streaming, and had less impact on battery life.

The search giant was especially keen to stress the dongle's ability to stream across multiple operating systems, be it Android or Apple's iOS.

"It's a big departure from the Nexus Q," she told the BBC. "What it boils down to is a focus around YouTube - and getting people back into that ecosystem.

"If you look at the opportunities around advertising, they're getting eyeballs back to that."

Also shown off at the event was Google's updated Nexus 7 tablet, which will go on sale in the "coming weeks".

The tablet will be the first to run Android 4.3, the latest iteration of the Jelly Bean flavour of Google's mobile operating system.

Among the software's new features will be the ability to set restricted profiles, meaning parents can, for example, only give their child access to certain functions on a device.

The Asus-built device is slightly smaller, and 50g (1.8oz) lighter, than the original Nexus 7, which was launched last year.

The new device will have a screen resolution higher than any in its class, boasting 323 pixels per inch.

That is significantly higher than the iPad Mini's 163ppi and the 7in Kindle Fire HD's 216ppi.

But Jason Jenkins, from technology website Cnet, said it still had a lot of ground to make up with consumers.

"I am not convinced that ordinary consumers will respond better to this tablet than the last one," he said.

"Apple has established such momentum, Google's real challenge isn't just making a better tablet than Apple, it's persuading ordinary people to care that it makes one at all."

The price point keeps it in line with Amazon's Kindle Fire, another key competitor - and considerably cheaper than Apple's iPad Mini, which retails starting at $329, or £269 in the UK.