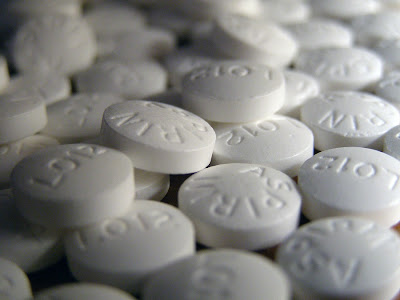 Women who use aspirin every other day may lower their chance of developing colon cancer by as much as 20 percent, compared to women who don't take the chalky pill.

For the study, researchers were interested in people who took aspirin every other day for extended periods of time. They looked at 39,876 women 45 and older who were enrolled in the Women's Health Study.

Participants all took a low dose pill of aspirin (100 mg) or a placebo every other day from when they were enrolled in the study until 2004. They completed regular questionnaires about their cancer status, how often they took medication, any negative effects, any additional aspirin use and other risk factors.

After the study, researchers followed 33,682 participants through March 2012. They were not given additional aspirin or placebos for this additional time frame.

After 18 years, women in the aspirin group had a 20 percent lower colon cancer rate than those who were taking the placebo. Women who continued to take aspirin on their own after the end of the trial had the lowest risk for colon cancer. There were no other differences between the placebo and aspirin groups for other cancer types, overall cancer risk or death.

The researchers pointed out that not all women enrolled in the Women's Health Study were followed up with, and that cases of gastrointestinal bleeding were only self-reported. However, they felt confident in saying that long-term use of aspirin every other day may reduce the risk for colorectal cancer in healthy women.

Dr. Andrew Chan, program director of the gastroenterology training program at Massachusetts General Hospital in Boston, told CBSNews.com that this study was especially important because it was a randomized clinical trial with very many subjects.

"It shows even more substantial evidence that there is a chemopreventative benefit for colon cancer," he said.

Previous studies have shown that aspirin may have anti-colon cancer properties. A June study in JAMA showed that the anti-inflammatory drug was linked to a 27 percent lower risk of developing colon cancer not linked to mutations in the BRAF gene. Other research showed that five-years after colon cancer diagnosis, 97 percent of aspirin users were still alive compared to 74 percent of those not taking the medication.

Daily aspirin use was also linked to lower cancer deaths overall, and was shown to prevent cancer from getting worse in patients who already have the disease in separate studies.

Chan, who was not involved in the study, emphasized however that observed side effects of gastrointestinal bleeding and peptic ulcers are widely known, and this may play a role in a patient's decision on whether or not they want to take the medication. He said each individual patient has to weigh the cancer benefits and aspirin risks to decide if they want to try this form of potentially preventative treatment.

"I think it does require a really educated discussion with the patient (and the doctor), so they understand the risk and benefit of aspirin use," Chan explained.

Dr. Bethany DeVito, gastroenterologist at North Shore University Hospital in Manhasset, NY, also echoed doubts if routine aspirin use was for everyone to CBSNews.com.

"Given these findings, the question remains, should low dose alternative day use of aspirin be recommended as a chemopreventive agent for healthy women," DeVito, who was not involved in the study, said. "Given the lack of significant reduction for all cancer and the higher risk of GI bleeding complications, long term alternative low dose use of aspirin should be limited for use as a chemopreventive agent in women who are at high risk of developing colorectal cancer (i.e. Family history of colorectal cancer, personal history of colorectal cancer or polyps) and not for widespread use in healthy middle aged women."