THE NEW ALIEN PLANET 300 LIGHT-YEARS FROM THE EARTH 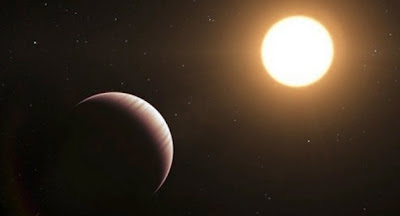 European astronomers not only discovered a new planet outside our solar system, but actually took a picture of it, a feat that is almost unheard of in astronomy today. The new planet, which its discoverers affiliated with the European Southern Observatory dubbed HD 95086 b—after its star, HD 95086—is a remarkably close one, at only 300 light-years away.

Don’t count on future space crews venturing out to colonize it, though. Astronomers calculate that it is a fiery-hot gas giant that is four to five times the size of Jupiter. Its atmosphere might have water vapor, but the intense pressure of the planet’s churning fathoms of gas and liquid would definitively rule out habitability. So would the surface temperatures, which the astronomers say run at almost 1,300 degrees Fahrenheit.

This planet is nevertheless the smallest exoplanet that astronomers have ever managed to image. The European Southern Observatory, which operates three observatories in Chile, captured the photograph in infrared light at its Very Large Telescope (VLT) at the Paranal Observatory in Chile’s Atacama Desert.

The Paranal observatory’s VLT has an instrument called the Spectro-Polarimetric High-contrast Exoplanet Research (SPHERE), which just might be able to locate other planets closer to the star. SPHERE uses arrays of infrared beams and lenses to detect and directly observe exoplanets and their surrounding environs.

The star, incidentally, is fairly young, at just 10 million to 17 million years old, and it is slightly larger than the sun. The small star is surrounded by a debris field, likely fueling planetary formation, according to astronomers. Having discovered this planet at an apparently very early time in its solar system’s development, the astronomers also hope that further study of it might yield new insights into how solar systems generally form.

So far, this planet is one of only twelve exoplanets that astronomers have been able to directly image. The normal means of discovering an exoplanet is to look for indirect signs of its gravity’s effect on its star’s position, spin, and outgoing light rays. NASA’s Kepler Space Telescope, which has captured data on nearly 3,000 planets thus far, continues to maintain the largest database on exoplanets. A number of Earth-like planets are suspected to reside in the Milky Way galaxy, and astronomers have spent much of the past several months examining data collected by Kepler in hopes of discovering planets similar to Earth.

The astronomers delivered a presentation on their findings at a recent International Astronomical Union-sponsored symposium in British Columbia. They will also publish a report in an upcoming edition of Astrophysical Journal Letters.