THE FEMALE ARTISTS' DOMINATION OF THE CHARTS 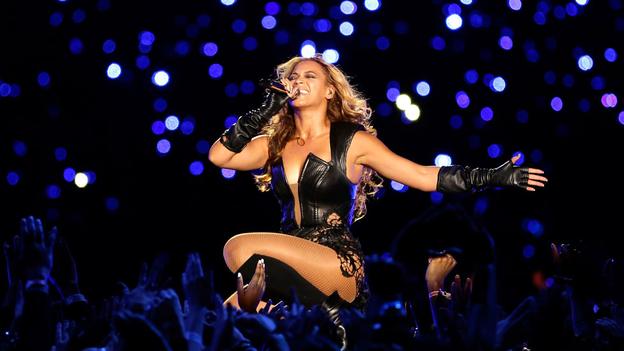 While female artists rule the pop charts, many still conform to long-held music industry stereotypes. Miranda Sawyer asks if change is on its way.

This is an era where female performers dominate music as never before: I give you Beyoncé, Rihanna, Taylor Swift, Katy Perry, Lady Gaga, Jennifer Lopez, Jessie J, Adele, Florence and her Machine – not to mention poor, sad Britney and the never-ending saga that is Madonna. These are women whose music tops charts across the world,
whose dollar sales are well into seven figures and, perhaps most importantly, who understand that a music career can amount to more than just singing songs. Rihanna, for instance, shifts perfume like she’s a department store saleswoman. Jennifer Lopez acts in major films and appears on American Idol. Jessie J is a judge on British TV talent show The Voice. And all of them help sell whichever publication puts them on its cover.

But – and this may seem a silly question – why now? Why are there so many women artists around? After all, in the early days of this millenium, female singers weren’t the thing: music was about the white boy rock band. Coldplay, Maroon 5, Green Day – all were having their moment in the sunshine. Still, consumers are quickly bored, and so the major labels’ A&R departments began to look elsewhere. And when, in 2006, Amy Winehouse (and Lily Allen in the UK) suddenly flooded public consciousness like a drug we never knew we wanted, they thought they’d discovered the answer. An A&R guy, then at Sony, told me that labels were actively looking to sign young female solo singers because, according to him, they were less expensive (only one of them) and easier to manipulate (no support from the rest of the band, plus, you know, they’re just girls). Poor guy. Put him in a room with Beyoncé et al, and he’d be whimpering as they force-fed him those words.

Given that for many years the majority of A&R people have been straight males, it’s interesting to consider what kind of woman gets a record deal. Shows like American Idol demonstrate that there are more than enough talented vocalists out there. There are hundreds, thousands, ready to sing their hearts out and shake up the world (or at least the world’s Saturday night TV). But only a few will make it – and when it comes to women, for decades only the good-looking got through the door. Thus many of the most powerful female musicians in the industry are stone cold foxes, gorgeous women whose looks would dazzle you into submission before they even let loose their voices.

Why is this? Despite its reputation as a rebellious outsider, rock and roll has long been dominated by convention and archetypes. Serious-minded indie boys, sexy r’n’b chicks, tougher-than-thou hip-hoppers, all singing-all-dancing boy bands: it can seem as though music is on an endless loop of cliché. Each artist slots into a ready-made box. It can make a music fan rather depressed, being presented with yet another new sensation that is exactly like an old one, but with a more contemporary haircut.

And the music business standard for a solo woman singer is that she has to be pretty. Sure, there are those artists who operate on the outside, alternative females, from Siouxsie Sioux, to Peaches, from PJ Harvey to Deep Vally. They like to play with their looks, use their sexuality to challenge or illustrate a particular idea. But if you’re aiming for conventional chart success then you’d better scrub up well. Think of Celine Dion, an ordinary-looking woman with an extraordinary voice. Discovered young, her husband/manager removed her from the limelight whilst she had her teeth fixed, her hair straightened and worked on her English: all image upgrades deemed necessary before she smashed into the mainstream.

Of the top ten biggest selling female artists of all time, only Lady Gaga completely confounds this stereotype. Gaga uses her appearance as a statement: her choice of clothing, make-up and shoes are all designed to provoke a reaction other than, ‘ooh, doesn’t she look nice’. By dressing herself up as an artwork, she prevents us from judging her by tedious contemporary conventions of beauty. She is the living embodiment of how alternative, anti-establishment attitudes - treating gay people the same as straights; women using their bodies as they wish – have come into the mainstream. But she is the exception.

Still, considering their obsession with trends, does this mean that when A&R departments get bored once more, that solo female artists might not be so prominent? I wonder. The digital age has made the music business less sure of itself and its know-it-all taste. Consumers have more freedom to discover music than ever before: they don’t wait to hear a track on the radio, they stumble across artists on YouTube, via music sites or blogs. Artists themselves don’t wait to be signed before releasing their work: Tinie Tempah, amongst others, released his own, very successful, mix-tapes before being signed by Sony. This means that major labels have been forced to become more open-minded when it comes to their signing policies. Even a decade ago, an out-there act such as James Blake would not have been signed by a major: but he has his own label, put out via Universal.

Realising that music fans are more open-minded than they assumed has forced the major labels to shake up their pre-conceptions – and perhaps with them, those clichéd rules about solo female artists. Well, hooray to that. It’s rather nice to think of labels having to re-jig their attitudes towards female singers. Quirkier characters such as Lianne LeHavas, Laura Marling, Savages and Haim are slipping into the limelight. They are all lovely but don’t sell themselves on their looks. And Lady Gaga and Lagerfeld-baiting Adele, smash successes both, seem to disprove the old theories. It doesn’t look as though pop’s infatuation with women is over yet.
----------------
http://www.bbc.com/culture/story/20130531-women-on-top-in-pop/1
Posted by pratanacoffeetalk at 8:52 AM