THE ORIGIN OF TEA 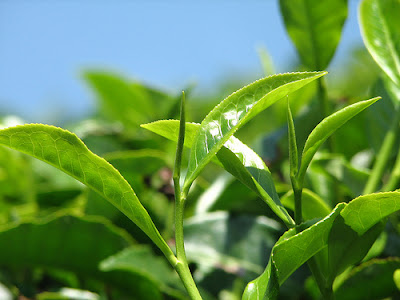 Every day, people drink about three billion cups of tea. Tea is one of the most popular beverages in the world. In this connection, it is particularly interesting that tea's popularity is almost completely based on a series of incidents. Tea is a paradoxical example of a product that is engaged in it own marketing by itself.

The first incident was the very appearance of such a drink as tea. Legend has it (the drink appeared at the time, from which nothing,
but a few legends is left), that people started to make tea at the behest of emperor Chen Nung of southern China, who lived in the III millennium BC. One day, the emperor wanted to have some hot water, but something distracted him, and few tea leaves fell into his cup. They gave the drink a distinctive taste that Chen Nung liked very much. The emperor ordered to collect and preserve the leaves, and then issued a decree making tea a national drink.

Other countries, where tea grows, have their own legends about the origin of the drink, but they are much more mythological. In addition, they generally describe the appearance of tea bushes, rather than the beverage. All this made the Chinese version of the discovery of tea as a drink the main one.

In general, tea leaves accidentally fall in cups of hot water every now and then, forcing people to make discoveries in this regard. In 1904, a tea bag fell into the cup of a customer of New York merchant Thomas Sullivan. Shortly before that, Thomas had enhanced his business. Tin cans, in which tea was traditionally packed, were quite heavy, and their transportation was expensive. Sullivan decided to take a risk and carry dry leaves in paper bags. By that time, tea was no longer a luxury product, so even damaged packaging would not cause considerable losses.

It was a paper bag and fell into the cup of a client of Thomas Sullivan. When the customer sipped the drink, he said that the drink was not so bad - no worse than regular tea. This marked the invention of a tea bag, which today can be found in almost every home, office or coffee shop.

An accident also explains the appearance of one of the most popular teas in the world - "Earl Grey": black tea with the addition of beragmot oil.

Earl Grey, who gave the name to the product, is a historical figure. Charles Grey was a well known British politician, the 26th Prime Minister of the country. Among other things, in he owned tea plantations in India.

The story of Earl Grey tea, however, has a great deal of legends. Some of them say that British sailors rescued the son of a Chinese mandarin in a shipwreck. To express his gratitude, the mandarin sent Earl Grey tea with bergamot, which was later named after him. However, this version raises doubts. First, the mid-19th century in the UK was not the third millennium BC in China, but there was no documented evidence preserved to support such a remarkable event.

Secondly, such a situation seems contrary to common logic. Thus, the unnamed Chinese Mandarin, even if the British sailors indeed rescued his son, would most likely wish to thank the leadership of their country, rather than the sailors. He would have sent the gift to the monarch, rather that the Prime Minister. Moreover, the gift seems to be rather strange. The Chinese are not fond of black tea at all. They neither grow, nor produce black tea in China. The main suppliers of black tea were India and Ceylon. To crown it all, China does not grow bergamot. Even if the mandarin had rare black tea with bergamot, hardly would he send it to Britain as a "gift from China."

Another version of the appearance of the beverage in Europe seems to be much more plausible. In 1838, a British ship carrying goods from India to the UK, found itself in a storm. In the holds, next to bales of a tea leaves, there were barrels (or bottles) of bergamot oil. During the storm, the barrels with bergamot oil broke and the oil soaked the tea bales. Since both oil and tea were quite expensive products the owner did not throw them out, and instead tried to sell them as a new kind of tea. The product was a success, and the British quickly came up with a name for it in honor of their Prime Minister.

Posted by pratanacoffeetalk at 5:03 PM