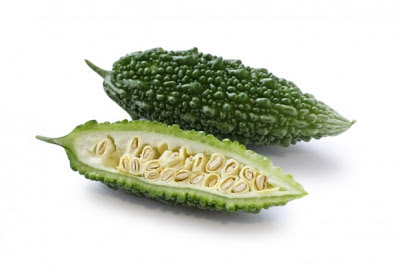 A new study from the University of Colorado Cancer Center reveals that bitter melon juice restricts the ability of pancreatic cancer cells to metabolize glucose, thus cutting the cells’ energy source and eventually killing them.

The findings of the study were published in the journal Carcinogenesis.

“Three years ago researchers showed the effect of bitter melon extract on breast cancer cells only in a Petri dish. This study goes much, much farther,” says Rajesh Agarwal, PhD, co-program leader of Cancer Prevention and Control at the CU Cancer Center and professor at the Skaggs School of Pharmacy and Pharmaceutical Sciences.

“We used the juice – people especially in Asian countries are already consuming it in quantity. We show that it affects the glucose metabolism pathway to restrict energy and kill pancreatic cancer cells.”

Argwal became interested in bitter melon juice by connecting the dots of existing research in new ways. Pancreatic cancer is typically preceded by diabetes, and bitter melon juice has been shown to effect type-II diabetes. It has been used for centuries in the folk medicines of China and India to combat diabetes. Argwal and colleagues wondered what would happen if they left diabetes out of the equation and directly examined the link between pancreatic cancer and bitter melon.

Argwal says the result is an “alteration in metabolic events in pancreatic cancer cells and an activation of the AMP-activated protein kinase, an enzyme that indicates low energy levels in the cells.”

“It’s a very exciting finding,” Agarwal says. “Many researchers are engineering new drugs to target cancer cells’ ability to supply themselves with energy, and here we have a naturally-occurring compound that may do just that.”

Argwal’s team is applying for grants to allow them to continue studying bitter melon in further chemoprevention trials in mouse models of pancreatic cancer.

Posted by pratanacoffeetalk at 10:47 AM