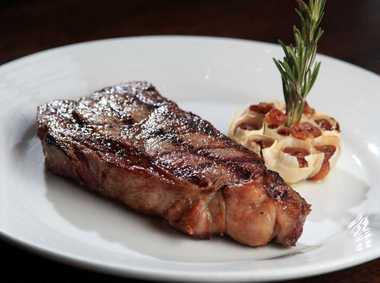 A dietary compound abundant in red meat and used as a supplement in energy drinks, energy pills and some weight-loss treatments has been found to promote hardening of the arteries, according to a study released Sunday by a research group at the Cleveland Clinic.
The finding may help explain why some people, even when they get their cholesterol under control, still suffer ill effects from a diet high in meats such as beef, venison, lamb, duck and pork.

The research group, led by Dr. Stanley Hazen, section head of preventive cardiology and rehabilitation, has been investigating the link between heart disease and foods, the bacteria in the intestine that digest them, and the substances these bacteria create in the digestion process.

In 2011, the group connected the dietary nutrient lecithin, found naturally in animal products, to heart disease through a byproduct of its metabolism in the gut called TMAO. In those studies TMAO, or trimethylamine N-oxide, proved to be a 10-fold stronger predictor of heart disease than cholesterol, a relationship that has held up in more recent work.

Now Hazen's group has found a similar relationship between TMAO and carnitine, a substance that is found in abundance in red meat and is needed in the body for the production of energy. When carnitine is digested, it drives up TMAO, and TMAO leads to increased plaque buildup in the arteries.

The finding is "fascinating, and starts to build a really interesting story with a lot of important public health implications," said Dr. Daniel Rader, a professor of medicine at University of Pennsylvania who specializes in genetics and heart disease and was not involved in the research.

"It leads to an interesting question that I don't have the answer to: Is there evidence that red meat consumption in people taking statins is still associated with cardiovascular risk? I don't think we know that yet," Rader said.

Rader said that Hazen's paper has changed what he will counsel patients, though.

"What this suggests is that maybe there really is a major mechanism associated with red meat consumption that's associated with cardiac risk factors independent of effects on blood cholesterol. Based on this data it makes sense to eat red meat in moderation at most even if your cholesterol is well-controlled."

While the connection between a diet high in red meat and heart disease is well established, the association can't be entirely explained by the amount of cholesterol and fat in the foods, Rader and Hazen explained.

"The risk of heart disease is disproportionately high to the amount of cholesterol and saturated fat in the meat," said Hazen.

Carnitine seems to account for some of that unexplained risk, he said.

In this most recent study, published April 7 in Nature, Hazen's group tested the carnitine and TMAO levels of omnivores, vegetarians and vegans to see if there were differences in the levels of the two substances due to diet.

They also took blood samples to test for carnitine and TMAO from more than 2,500 patients undergoing elective heart evaluations, and examined the effects of a carnitine-heavy diet on mice.

One of the study's biggest surprises, Hazen said, was how large an impact vegan and vegetarian diets had on the formation of TMAO from carnitine; people in the study who did not habitually eat red meat did not produce the plaque-forming TMAO even when they were given large doses of carnitine in the form of a steak or a supplement.

"Chronic dietary pattern has a real profound effect on the intestinal flora composition and your ability to make TMAO," Hazen said. Vegans and vegetarians seem to lack the microbes necessary to break down the carnitine, which may help explain the heart-protective benefit of such a diet.

"As far as I'm aware, this is the first time that anyone's really shown such a big dichotomy in metabolism between someone who's a vegetarian or vegan versus an omnivore," Hazen said.

Yet even those who eschew red meat may not be immune to the effects of carnitine, Hazen warned, because of the substance's frequent use as an energy-boosting supplement.

"It's everywhere," he said. "The amount of carnitine in many energy drinks is equivalent to a porterhouse steak, or more. Especially if you're talking about kids who are being targeted with all this advertising, drinking these drinks is like eating steaks every day and they're getting it in a can and don't even realize it."

Carnitine is usually listed on energy drink and supplement labels as L-carnitine, and may be part of a longer list of ingredients as an "energy blend." In the body, carnitine is used to help transport fatty acids, which are used as fuel, into the fuel production chambers of every cell in the body.

While it's long been touted as an energy-booster, there is no consistent evidence that carnitine improves exercise ability, function, or energy levels.

While it's going to take a lot more research to be sure what the long-term effects of supplemental carnitine intake might be, Hazen is concerned.

"It's shifting their [gut] flora to one that's more likely to promote atherosclerosis or hardening of the arteries," he said. "I wouldn't want my family members drinking these."

"I do think that's a second source of carnitine in the diet that people aren't aware of and don't think of being deleterious," Rader said. "This suggests that if you're a habitual consumer of supplemental carnitine you may being putting yourself at higher cardiovascular risk."

The new study also showed that blood levels of carnitine are able to predict cardiac risk. "Even after adjusting for all the traditional cardiac risk factors, blood level of carnitine predicts your future risk of heart attack and stroke death," Hazen said. The findings came from a large group of patients tested while undergoing cardiac evaluation.

Like the group's previous studies on lecithin, though, it was clear from the results that it wasn't the carnitine itself that was dangerous, but its conversion to TMAO that accounted for the elevated risk.

Mice who were given broad-spectrum antibiotics to wipe out their gut bacteria did not produce TMAO even on a high-carnitine diet, confirming the microbes' role in linking the two. The group previously found the same result in their lecithin study.

That doesn't mean anybody should be taking antibiotics to help prevent heart disease, though, Hazen said. It does mean that a heart-healthy probiotic or yogurt might be a way of modifying the carnitine-TMAO pathway and reducing heart disease risk.

Therapeutics like these are where Hazen's group is focused, he said.

"The first step is understanding what the components and the participants are, and now that we're getting a better handle on all these things, we're also finding new ways to explain how it's contributing to heart disease," he said. "The most exciting thing is going after a drug or food as a way of blocking it."

The group also continues to work on a diagnostic test for TMAO, which should be available late this year.

Posted by pratanacoffeetalk at 11:08 AM