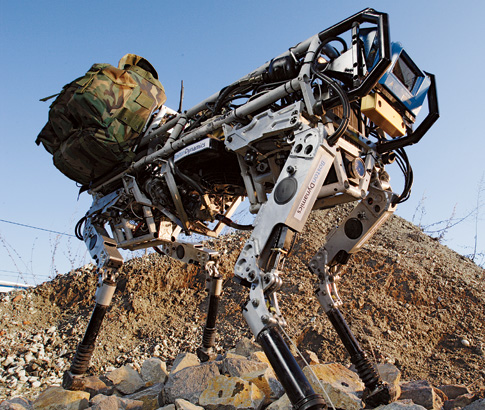 More than half the Earth can only be accessed by foot because conventional vehicles can’t manage difficult terrain. That’s why engineering company Boston Dynamics, with funding from the Defense Department’s Defense Advanced Research Projects Agency, created BigDog.

The four-legged robot can run, climb terrain including a muddy trail and slopes up to 35 degrees, and walk over rubble and through snow and water. BigDog has also traversed 12.8 miles non-stop without refueling, a world record for legged vehicles.

Not only can BigDog carry a 340-lb load, a new video shows the 2 ½-foot tall, 3-foot long robot has been upgraded to throw cinderblocks, a capability that you can imagine might someday be used in search and rescue operations, or for clearing debris in dangerous or unstable situations.

It’s a pretty remarkable technological feat when you watch it in action -- the rough-terrain robot’s engine drives a hydraulic actuation system and its four legs work like an animal’s, “with compliant elements to absorb shock and recycle energy from one step to the next.”

Boston Dynamics calls it dynamic manipulation, which it dialed in with funding from the Army Research Laboratory's RCTA program.

Watch it in slow motion near the middle of this short clip -- the leg movements are nothing short of true-to-life.

While Boston Dynamics has successfully experimented with having BigDog follow a human leader and travel to pre-defined GPS locations, the robot currently needs a human operator to guide it, although next gen versions will use computer vision, light detection and ranging and GPS so as to make the robot more autonomous.

Think BigDog is impressive? Boston Dynamics’ website offers photos, videos and information about a slew of interesting and maybe even scary robots in the works, such as one that can scale walls and another called Cheetah you definitely don’t want chasing you -- it can run 18 mph.

Best of all is a robot called PETMAN that looks like the beginnings of a Terminator, although Boston Dynamics says it was developed to test special clothing used by military personnel.

Posted by pratanacoffeetalk at 8:10 AM