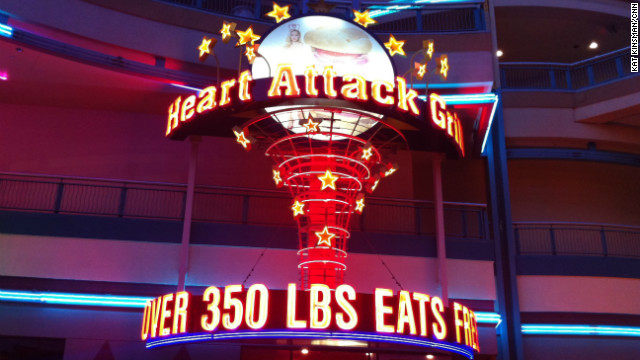 The unofficial spokesman for the Heart Attack Grill in Las Vegas has died of a heart attack. He was the second unpaid mascot to die in the past two years.

John Alleman, 52, suffered an attack while waiting at a bus stop in front of the diner last week. He was taken off life support Monday, the Las Vegas Sun reported.

The medically themed diner is famous for its huge hamburgers, extra-fat milkshakes and fries cooked in lard. It uses the tagline: "Taste worth dying for."


Owner Jon Basso told the Sun that Alleman came to the restaurant daily and encouraged passing tourists to try its calorie-laden offerings.

"He never missed a day, even on Christmas," Basso said. "People just loved him. He connected with people in a real way." Alleman became an unofficial mascot for the restaurant, which features waitresses in nurse garb. His caricature as "patient John" graced its merchandise and menus.

In 2011, another unofficial spokesman, a 575-pound man named Blair River, died at age 29. At the time, friends said pneumonia may have been the cause of death.

In 2012, a man in his 40s was hospitalized after he began sweating and shaking while eating a 6,000-calorie Triple Bypass burger at the downtown Las Vegas restaurant.

The ominously named diner features tongue-in-cheek health warnings and casts customers as patients. Eaters are given surgical gowns as they choose from a calorically extravagant menu.