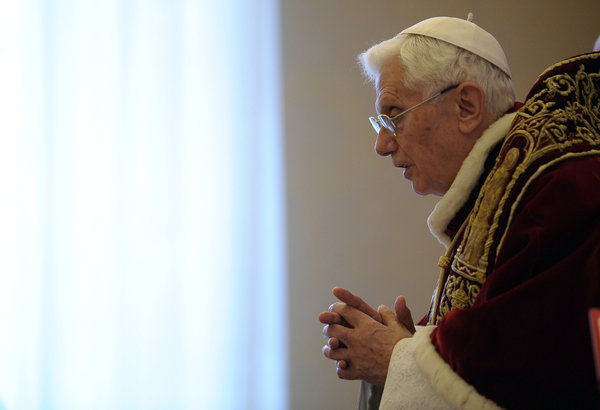 Citing advanced years and infirmity, Pope Benedict XVI stunned the Roman Catholic world on Monday by saying that he would resign on Feb. 28 after less than eight years in office, the first pope to do so in six centuries.

After examining his conscience “before God,” he said in a statement that reverberated around the world on the Internet and on social media, “I have come to the certainty that my strengths, due to an advanced age, are no longer suited to an adequate exercise” of his position as head of the world’s one billion Roman Catholics.

A profoundly conservative figure whose papacy was overshadowed by clerical abuse scandals, Benedict, 85, was elected by fellow cardinals in 2005 after the death of John Paul II.

The Rev. Federico Lombardi, the Vatican spokesman, said that the pope would continue to carry out his duties until Feb. 28 and that a successor could be elected by Easter, which falls on March 31. But, he added, the timing for an election of a new pope is “not an announcement, it’s a hypothesis.”

While there had been questions about Benedict’s health, the timing of his announcement sent shock waves around the world, even though he had in the past endorsed the notion that an incapacitated pope could resign.

“The pope took us by surprise,” said Father Lombardi, who explained that many cardinals were in Rome on Monday for a ceremony at the Vatican and heard the pope’s address. Italy’s prime minister, Mario Monti, said he was “very shaken by the unexpected news.”

The announcement plunged the Roman Catholic world into intense speculation about who will succeed him and seemed likely to inspire many contrasting evaluations of a papacy that was seen as both conservative and contentious.

The pope made his announcement in Latin, but his statement was translated into seven languages: Italian, French, English, German, Polish, Portuguese and Spanish.

“In today’s world,” the pope said, “subject to so many rapid changes and shaken by questions of deep relevance for the life of faith, in order to govern the bark of St. Peter and proclaim the gospel, both strength of mind and body are necessary, strength which in the last few months has deteriorated in me to the extent that I have had to recognize my incapacity to adequately fulfill the ministry entrusted to me.”

“For this reason,” he continued, “and well aware of the seriousness of this act, with full freedom, I declare that I renounce the ministry of bishop of Rome, successor of St. Peter.”

Benedict, the former Cardinal Joseph Ratzinger, was elected on April 19, 2005.

At a news conference, the Vatican spokesman said the pope did not express strong emotion as he made his announcement but spoke with “great dignity, great concentration and great understanding of the significance of the moment.”

Father Lombardi said that the pope would retire first to his summer residence in Castelgandolfo, in the hills outside Rome, and later at a monastery in Vatican City.

At the time of his election, Benedict was a popular choice within the college of 115 cardinals who chose him as a man who shared — and at times went beyond — the conservative theology of his predecessor and mentor, John Paul II, and seemed ready to take over the job after serving beside him for more than two decades.

In the final years of John Paul II’s papacy, which were dogged by illness, Benedict, then Cardinal Ratzinger, said that if the pope “sees that he absolutely cannot do it anymore, then certainly he will resign.”

When he took office, Pope Benedict’s well-known stands included the assertion that Catholicism is “true” and other religions are “deficient”; that the modern, secular world, especially in Europe, is spiritually weak; and that Catholicism is in competition with Islam. He had also strongly opposed homosexuality, the ordination of female priests and stem cell research.

Born on April 16, 1927, in Marktl am Inn, in Bavaria, he was the son of a police officer. He was ordained in 1951, at age 24, and began his career as a liberal academic and theological adviser at the Second Vatican Council, supporting many efforts to make the church more open.

But he moved theologically and politically to the right. Pope Paul VI named him bishop of Munich in 1977 and appointed him a cardinal within three months. Taking the chief doctrinal job at the Vatican in 1981, he moved with vigor to quash liberation theology in Latin America, cracked down on liberal theologians and in 2000 wrote the contentious Vatican document “Dominus Jesus,” asserting the truth of Catholic belief over others.

The last pope to resign was Gregory XII, who left the papacy in 1415 to end what was known as the Western Schism among several competitors for the papacy.

Benedict’s tenure was caught up in growing sexual abuse scandals in the Roman Catholic Church that crept ever closer to the Vatican itself.

In 2010, as outrage built over clerical abuses, some secular and liberal Catholic voices called for his resignation, their demands fueled by reports that laid part of the blame at his doorstep, citing his response both as a bishop long ago in Germany and as a cardinal heading the Congregation for the Doctrine of the Faith, which handles such cases.

In one disclosure, news emerged that in 1985, when Benedict was Cardinal Ratzinger, he signed a letter putting off efforts to defrock a convicted child-molesting priest. He cited the priest’s relative youth but also the good of the church.

Vatican officials and experts who follow the papacy dismissed the idea of his stepping down at the time. “There is no objective motive to think in terms of resignation, absolutely no motive,” said Father Lombardi, the Vatican spokesman. “It’s a completely unfounded idea.”

For his supporters, it was a painful paradox that the long-gathering abuse scandal finally hit the Vatican with a vengeance under Benedict. As the leader of the powerful Congregation for the Doctrine of the Faith, he had been ahead of many of his peers in recognizing how deeply the church had been damaged by revelations that priests around the world had sexually abused youths for decades. As early as 2005, he obliquely referred to priestly abuse as a “filth in the church.”

He went on to apologize for the abuse and met with victims, a first for the papacy. But he could not escape the reality that the church had shielded priests accused of molesting, minimized behavior it would have otherwise deemed immoral and kept it secret from the civil authorities, forestalling criminal prosecution.

The church’s 265th pope, Benedict was the first German to hold the title in half a millennium, and his election was a milestone toward Germany’s spiritual renewal 60 years after World War II and the Holocaust. At 78, he was also the oldest new pope since 1730.

The church he inherited was in crisis, the sexual abuse scandal being its most vivid manifestation. It was an institution run by a largely European hierarchy overseeing a faithful largely residing in the developing world. And it was increasingly being torn between its ancient, insular ways and the modern world.

For the church’s liberal elements, rather than being the answer to that crisis, Benedict’s election represented the problem: an out-of-step conservative European academic. Many wondered if he would be a mere caretaker, filling the post after the long papacy of the beloved John Paul until a younger, more dynamic heir could be elevated.

In 2006, less than two years into his papacy, Benedict stirred ire across the Muslim world, referring in a long, scholarly address to a conversation on the truths of Christianity and Islam that took place between a 14th-century Byzantine Christian emperor, Manuel II Paleologus, and a Persian scholar.

“The emperor comes to speak about the issue of jihad, holy war,” the pope said. “He said, I quote, ‘Show me just what Muhammad brought that was new, and there you will find things only evil and inhuman, such as his command to spread by the sword the faith he preached.’ ”

While making clear that he was quoting someone else, Benedict did not say whether he agreed. He also briefly discussed the Islamic concept of jihad, which he defined as “holy war,” and said that violence in the name of religion was contrary to God’s nature and to reason.

Benedict also faced questioning by some critics about what he and others have said was his unwilling conscription into the Hitler Youth and the Germany Army during the Nazi era. He was also faced accusations that he displayed reticence and insensitivity about the Holocaust.

In a book-length interview in 1997, Benedict, then Cardinal Ratzinger, said, “’As a seminarian, I was registered in the Hitler Youth.’” He added, ’”As soon as I was out of the seminary, I never went back.’”

Reared in a Catholic family in Bavaria, where the church was seen in many ways as a bulwark against Nazism, Benedict was later drafted into the German Army and served in an antiaircraft unit.

As pope he visited Auschwitz in 2006 as a gesture of atonement, calling himself a “son of the German people.” A year earlier, on one of his first trips as pope, he visited the Cologne synagogue and marked the 60th anniversary of the liberation of the Nazi concentration camps, “in which millions of Jews -- men, women and children -- were put to death in the gas chambers and ovens.”

Posted by pratanacoffeetalk at 9:35 PM