I WILL REMEMBER HIM IN MELBOURNE 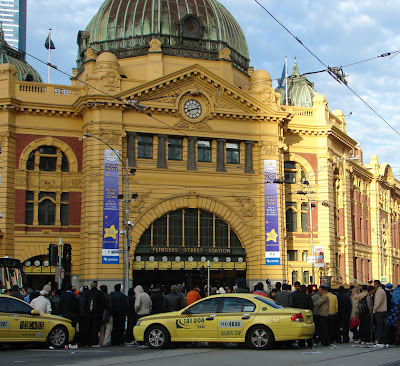 Just recently I flew from Sydney to Melbourne for an early morning meeting followed by a series of additional meetings, all in the same office. It was one of those 'down and back in one day trips ', so fortunately I only needed to carry my brief case so I could go direct to the express check in, saving myself up to half an hour in a queue.

Upon arriving in Melbourne at just after 7:15 a.m., I headed straight for the taxi rank to pick up a cab. As I walked out into the morning light I was greeted with a skyline
filled with dense smoke, the product of the most recent horrific bushfires in Victoria. As I gazed in amazement at this scene and compared it in my mind to my last visit to Los Angeles, a voice broke my preoccupation.

'Good morning sir, do you need a cab', came from a Yellow cab parked at a slight angle to the curb just in front of me, the window was wound down and a bright smiling face look out at me. I said yes in a flash and jumped into the cab.

When I told the driver where I wanted to go - his eyes seemed to brighten even more and he asked, 'Sir, what time do you need to be there?' I replied, 'by 9:00 a.m.,' for a series of meetings and he nodded, turned on the meter and off we drove. Within minutes he said that it was a very long drive, probably an hour and half and he would do his very best to get me there before 9:00 a.m.

I knew my destination was a long way from the airport and had opted for a cab, because I was not sure that if I hired a car I would be able to navigate my way to the destination and still get there on time at 9:00 a.m. As I settled in for the long trip, the driver and I began to talk about the bush fires, the business environment, his family, his love of Australia plus a whole host of topics and issues. Needless to say he also got to know a lot about me, including the fact that I was in Melbourne for the day and would be returning to Sydney on a 6:30 p.m. flight. As you could expect by the end of the trip we were on a first name basis.

We arrived at my destination at 8:50 a.m. I signed my charge docket, which was big enough for me to think that Yusuf may have to ring American Express for a credit clearance. As I was about to get out of the cab, Yusuf handed me a Yellow cab card. He indicated that his mobile number was written on the back and that if I gave him a call around a half an hour before I needed to leave to catch my flight, he would come and pick me up. I thanked him and headed off for my meeting.

My day was a busy one and by 3:15 p.m. I had completed my meetings and was ready to make the long trip back to the airport. So I gave Yusuf a call on his mobile and he said ' Thank you Keith, I will pick you up in 30 minutes, ' and guess what - he did.

On the way back to the airport I spent the first half-hour picking up a number of phone messages and returning calls. When I had finished, Yusuf and I talked about his day working the area. He told me that after he had dropped me off, he had decided to spend the day in the area, knowing that at around 4:00 p.m. he could well have a fare back to the airport. He mentioned that it had been a good day for him with lots of short fares to keep him busy.

As we got closer to the airport, Yusuf said to me, 'You seem to know a lot about business, can you suggest how I can be a better cab driver?' I looked at him for a moment and then said, 'Yusuf, just keep doing what you are doing'.

He looked back at me as if to ask for further explanation of what I had said. I went on to say, 'Handing me your card and offering to come and pick me up, tells me that you already know how to be a better cab driver and you are doing it'. We chatted for the next forty minutes and then it was time for me to sign the cab charge docket and again think about the need for a call to American Express.

As I was about to get out the cab on the departures level at Melbourne airport, two ladies came rushing up and asked if could Yusuf take them to the city, as they were in a hurry to get there. Yusuf said yes and they jumped in. Now I knew from my discussions with Yusuf that I had been his first fare for the day and that he was due to finish his shift at 7:00 p.m. He had also told me that he lived very close to the city so this fare would take him close to home, finish the day at 7:00 p.m. and get home early enough to spend some quality time with his wife and six children.

Before embarking on his fare to the city, Yusuf got out of his cab and said, 'Thank you Keith - my brother. The next time you are coming to Melbourne, give me a call the day before and I will come and pick you up'. He smiled as he jumped in his cab, then he was on his way in the still smoke filled Melbourne atmosphere.

The moral in this real life experience :

The more time you spend with your customer, get to know them personally, talk and listen to them and treat them with genuine courtesy and respect; the more business they will give you. Very often that same customer will also lead you to even more business of similar quality.

I still have Yusuf's card and the next time I travel to Melbourne, you can be sure that I will give him a call. That is the second part of the moral in this story - satisfied, happy customers become return customers and they tell lots of other people about their experience . . . And I just did.

Copyright © 2005 Keith Ready
Keith Ready is an Australian based business adviser and trainer whose specialty is working with his clients to improve top and bottom line business performance in a measurable way, through people. Keith is also known as Mr Inspiration and is publisher of InspirEmail which provides inspirational messages to refresh the spirit and boost the emotional bank account.
-----------------
http://www.motivateus.com/stories/perfect-customer-service.htm
http://1.bp.blogspot.com/_GpWtOVzm7oo/TNjxD8xTFoI/AAAAAAAAAO4/xZ1wsRIaN0w/s1600/r246352_1006630.jpg

Posted by pratanacoffeetalk at 6:09 AM