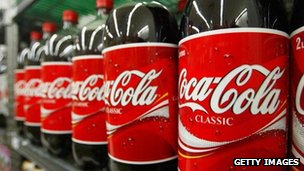 Drinking large quantities of Coca-Cola was a "substantial factor" in the death of a 30-year-old woman in New Zealand, a coroner has said.

Natasha Harris, who died three years ago after a cardiac arrest, drank up to 10 litres of the fizzy drink each day.

Coca-Cola had argued that it could not be proved its product had contributed to Ms Harris' death.

The coroner's verdict came on the day Coca-Cola Sales said sales in Europe and China fell in the last quarter of 2012, and warned of a "volatile" year to come.


'Clear warnings' needed
Natasha Harris, a mother of eight from the southern New Zealand city of Invercargill, suffered from ill health for years before her death.

Her family said she had developed an addiction to Coca-Cola and would get withdrawal symptoms, including "the shakes", if she went without her favourite drink.

"(She would) go crazy if she ran out... she would get the shakes, withdrawal symptoms, be angry, on edge and snappy," her mother-in-law Vivien Hodgkinson told the coroner's inquest last year.

Ms Harris drank Coke throughout her waking hours and her teeth had been removed because of decay.

Coroner David Crerar said her Coca-Cola consumption had given rise to cardiac arrhythmia, a condition when the heart beats too fast or too slow.

"I find that when all the available evidence is considered, were it not for the consumption of very large quantities of Coke by Natasha Harris, it is unlikely that she would have died when she died and how she died," Mr Crerar's finding said.

The coroner calculated that drinking 10 litres (17.5 pints) of Coke amounted to more than 1kg (2.2lb) of sugar and 970mg of caffeine, Television New Zealand (TVNZ) reports.

Mr Crerar said that Coca-Cola could not be held responsible for the health of consumers who drank excessive quantities of its product.

But he called on soft drinks companies to display clearer warnings on their beverages about the risks of too much sugar and caffeine.

Ms Harris and her family should have heeded the warning signs about her ill health, the coroner added.

"The fact she had her teeth extracted several years before her death because of what her family believed was Coke-induced tooth decay, and the fact that one or more of her children were born without enamel on their teeth, should have been treated by her, and by her family, as a warning," TVNZ quotes his statement as saying.

In a statement, Coca Cola said: "The coroner acknowledged that he could not be certain what caused Ms Harris' heart attack.

"Therefore we are disappointed that the coroner has chosen to focus on the combination of Ms Harris' excessive consumption of Coca-Cola, together with other health and lifestyle factors, as the probable cause of her death.

"This is contrary to the evidence that showed the experts could not agree on the most likely cause."

Posted by pratanacoffeetalk at 10:44 AM